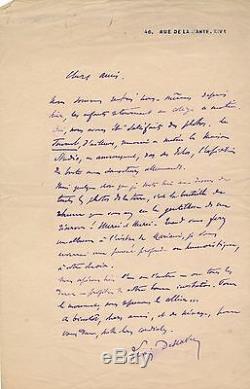 Autograph letter signed with \Interesting letter probably a photographer friend (his photos and his studio are mentioned). Also highlighted the mining disaster of Courrières in 1906 by reference to \The journal j, dailleurs thanked this morning the studio, announcing in its echoes, the exhibition of the bust to the German rescuers. But something that I put well over the pictures of the earth, this is the bottle of rum that you have been kind enough to book us! When you make an album of linstar Mariani, I will send you a profound or humorous thought to your choice.

Regarding the mining disaster of Courrières (10 March 1906) which caused over 1000 deaths, l. Westphalian arrival of rescuers, equipped dappareils advanced respiratory, was unanimously praised. The question of their honor was more laid. \Lucien Descaves to offer them as a souvenir, one of the most beautiful works of Constantin Meunier, the \Descaves asked Ms. Constantin Meunier, the widow of the great sculptor, under authority to enforce, in bronze, out of the master. Wanting sassocier sympathy demonstration prepared for Westphalian rescuers, even Constantin Meunier made to the committee the gift of the bust we just asked him to leave again. \The item \The seller is \This article can be shipped worldwide.