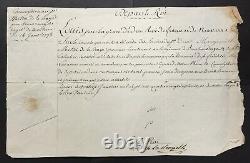 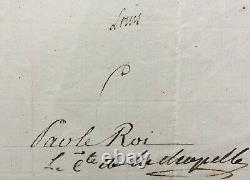 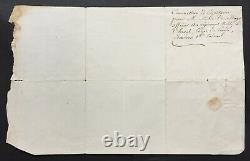 Louis xviii king of France document / signed letter Royalist army - 1798. Exiled under the French revolution and the first empire, he de jure adopted as a pretender to the throne the name of louis xviii, and returned in france during the restoration that followed the fall of the Napoleonic emperor. During his reign, considering the evolution of the franc between 1789 and 1814, louis xviii struggled to cope with the achievements of the revolution and the empire. Document / letter signed by louis stanislas xavier de france (louis xviii) on 14 January 1798 (louis xviii is then in exile), countersigned by the count of the chapel, commission of cavalry captain in the army of princes for mister millot de la craye, 1 page oblong in-4.

"washed by the grace of god king of france and navarre. On the account which was rendered to us of the services of Mr. Millot of the first lieutenant cray to the regiment of bourbon dragons, of his military talents and capabilities, and on the evidence which he gave of his fidelity, we have granted him and hereby grant him the commission of captain with our hand in our troops of horse-drawn in 1798 and our reign the third [louis xvi guillotined in 1793 and louis xvii died at the temple in 1795]". Born in Dijon on 15 February 1748, denis marguerite millot de la craye began his military career on 12 May 1762 as a pupil at the dauxonne-bapaume artillery school. 1773 he incorporated as second lieutenant the regiment of bourbon-cavalerie, now bourbon-dragons. Promoted lieutenant in 1775, he continued his career in this regiment and received a knight's badge from the Order of Saint Louis. In October 1791 he emigrated to join the army of the condé prince in worms. From 1792 to 1801 he participated in all battles in the army of princes as captain of cavalry. He finally left the Royalist army in August 1801 to retire to his native Burgundy.

Good condition sent by registered mail. The item "louis xviii king of france document / signed letter Royalist army 1798" has been on sale since Saturday 9 October 2021. It is in the category "collections\letters, old papers\autographs\historical persons".