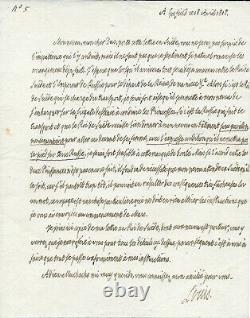 Autograph letter signed "to my dear Duke". Gosfield 6 April 1808; 1 page in-4. Louis xviii arranges the diplomatic conditions under which his nephew's departure must be made to join his wife: "My nephew, my dear Duke, carries this letter as a suede, you will not be surprised by the limpatience that leads to it, but this feeling so natural must not reverse the arrangements already made. I hope that when he arrives, everything will already be agreed between the King of Suede and the Emperor of Russia for the departure of the Queen, from my niece then if it is the King of Suede who takes over the transport, I will be very comfortable that he will allow my nephew to embark by the frigate destined to lead the princesses.

If it is the russia that makes itself transported and the king of Suede comes to give my nephew a building under parliamentary flag to go in front of his wife, with the express condition that he will not set foot on Russian land, I will be very sensitive to this mark of goodness. But if the agreement between the two powers is not yet made, it will be necessary for my nephew to wait as a sueda, because if he left too soon, it could result in very unfortunate consequences. In a word, this journey is a special thing that must not in any way alter the instructions I sent you at the beginning of March.

I attach here a copy of my letter to the king of suede, whose nephew is carrying, you will see that I refer to you for all the details above, therefore it is to you that everything happens according to my instructions. Farewell muchacho mi muy querido, you know my friendship for you". For the entire duration of the empire louis xviii spends his exile in angleterre. First in Gosfield, then at the castle of hartwell, near London, pensioned by King Georges iii as well as by the Tsar Alexander. The item "louis xviii letter autograph signed king of suede emperor of Russia" is on sale since Friday 4 September 2020. It is in the category "books, bd, magazines\old books, collection".