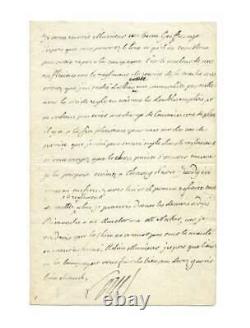 Autograph letter signed louis to a gentleman s. D (1781 before the month of May), 1 page small in-8 on bottom bifeuillet missing in straight margin without infringement of the text, trace of central fold. A beautiful letter from Louis xvi testifying to his personal desire to reduce the expenses of the court and to comply with the injunctions of his minister necker. \"I send you a beautiful doodle. I hope you can read it and that it will not disturb your rest in the countryside.

This is the result of my reflections on the regulation of the service of the mouth and you will see that I have stained a personal convenience with the strict rule avoiding duplication, and not wanting to create a burden of commissioner more. There are at the end several questions about service cases that I did not find settled (sic) in the regulation. If you think it can be sexercer as I propose, write to chouzy. You will confer them with him and he will be able to redo the rules immediately; then I could give the last orders Sunday to m. Necker because I wish it didn't drag on. Goodbye, Sir, I hope that the campaign will do you good, you must be hot. Advocating ardently for a policy of cost-cutting, the policy of Jacques necker (minister and general manager of the finances of the king's house) immediately targeted the privileges of the court: the pensions paid by the king, and the expenses of the king's house, the reduction of the grand offices he thus rationalized the department of the king's house, creating in 1780 the general office of expenses of the king's house. This letter was written in 1781, before May, the only year in which amelot, necker and chouzy collaborated at the highest offices of the king's new house in the newly established \"General Office of Expenditure of the King's House\" (which appeared in the royal lalmanach in 1781). Minister of Finance since 1776, necker did not occupy the office of finance director of the king's house only this year 1781, shortly before his first resignation.

This series of \"Republican\" reforms and the unfortunate experimentation of provincial assemblies will add to a political error by the minister that will be fatal to him. In February 1781, certainly shortly after the release of this letter, he sent the king an account of the state of finances to be published. It reveals for the first time to the general public detailed use of public expenditure and reveals, in the interests of transparency, all the advantages enjoyed by the privileged of the court. In return, they disavowed the Minister and denounced, with the support of financial experts, the Minister's trompe lil balance sheet of his action, masking the 46 million pound debt left by war spending, and instead pointing out a surplus of 10 million. \"The war that had been so successful against turgot began again under his successor,\" explains victor duruy.

I only regret the good that I had to do and that I would have done if we had given time. It was on this virtuous regret that Necker, director general of finance, took leave of louis xvi on 19 May 1781. The item \"louis xvi / autograph letter signed / necker / expenses / old regime / 1781\" is on sale since Tuesday, July 21, 2020.