Louis XV Signed Autograph Letter. The Queen And The Speech Of The Flagellation 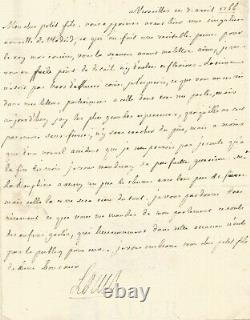 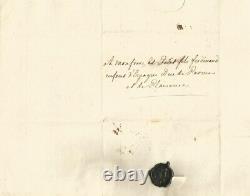 For many years, the autograph library has specialized in the sale of autograph letters and manuscripts. Signed autograph letter to his grandson, ferdinand ier de parme. Address on the fourth sheet. Important letter from the king concerning the health of her wife the queen marries leszczynska, then the parliamentary consequences of her famous iscours of flogging.

"My dear grandson, we learned before yesterday a singular news of madrid, and which makes me a real pain for the king my cousin, you will know it before my letter so I do not give you any details or other reflections. The Queen was not out of business as I hoped, what you will have seen in my letters after those you speak to me about, but today I have the greatest hopes, whatever is not yet without fever or puss, but unless a new accident that I do not foresee I count that at the end of the month I will ask you for her perfect cure. The dolphin also has a little cold with very little fever, but this one won't be anything. I forgive you very easily what you are leading me from my parliament; they are spoiled children, who fortunately on this occasion don't have the public for them. I kiss you my dear little son of good heart.

For a easier reading, we have francized the king's spelling here. The king evokes at the beginning of the letter "a singular news of madrid. This is the riots that occurred during March 1766. The popular revolt pushed king charles iii to leave madrid to take refuge in aranguez, leaving the city in the hands of the insurgents.

On March 3, 1766, louis xv solemnly recalled to the betting parliament. The main principles of the monarchy and in particular the right of reverence. Since the case of denominational notes, parliaments have waged a struggle against the royal authority, aggravated by their claim to act as the "classes" of a single court, sitting in several cities. One expresses reverences to the king, which are taken up by the others, the judges thus posing as representatives of the nation. When, on November 11, 1765, louis xv had the king's prosecutor arrested in the reindeer parliament, the chalotais, the betting and rouen parliaments protested immediately, the latter even reminding the sovereign of "the oath made to the nation" during the sacre.

It is only I who have the legislative power without dependence and without division. The whole public order emanates from me the reverences will always be received favorably when they breathe only this moderation which makes the character of the magistrate and of the truth. If, after I have examined these reverences and, knowingly, have persisted in my wills, my courses persevered in the refusal to submit to them; if, finally, when my authority was forced to deploy in all its expanse, they still dared to fight against it in a sort of way, by defence judgments, by suspensive oppositions or by irregular means of separation or resignation, confusion and anarchy would take the place of the legitimate order, and the scandalous spectacle of a rival contradiction of my sovereign power would reduce me to the sad need to use all the power that I have received from God to preserve my peoples from the disastrous consequences of these undertakings." Check out our manuscripts The Autograph Gallery of Centuries specializes in the sale and expertise of autograph letters and manuscripts of the great personalities of past centuries. Purchase / payment methods we accept the following methods of payment: transfers and bank cheques.

The prices shown are in euros and are net. All our shipments are made in registered mail with insurance at a flat rate of 10 for France and 20 for the rest of the world. We can also ship by private carrier at your request. Conditions of sale in accordance with the practice of the international league of the ancient bookstore, we accept a guarantee of return within 14 days. The return costs are borne by the buyer. About all the pieces proposed are originals whose authenticity we guarantee. Our invoices serve as proof of authenticity of the parts sold. However, at your request, we may issue a certificate of authenticity, in addition. The item "louis xv letter autograph signed.

The Queen and the speech of flogging" has been on sale since Saturday, July 31, 2021. It is in the category "collections\letters, old papers\autographs\historical persons". The seller is "juniennn0" and is located at/in lyon.