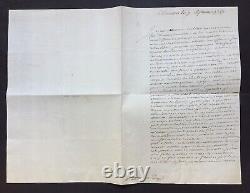 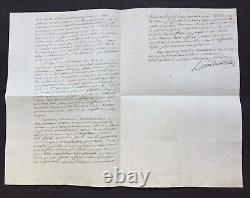 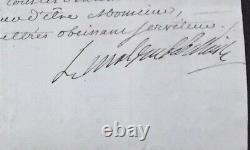 [louis xv] Maréchal de belle-isle - signed letter - Seven-year war - 1759. Marshal de france, duke de belle-isle, duke de gisors, pair of france, knight of the orders of the king and the golden fleece, prince of the empire, he became minister of state in 1756 and secretary of state for war in 1758. Letter signed to the Marquis de torcy, versailles, September 7, 1759, 2 and a half pages in-folio. Letter concerning the seven-year war (1756-1763), a major conflict in the history of the European Union between two systems of alliance. During the year 1759, friedric ii, allied with france, suffered several defeats and his territory was invaded on all sides, with prussia on the brink of collapse.

To his rescue, the French army resumed the offensive towards hanovre with an army of 80,000 men under the orders of the Marshal of Contades and Victor-Francois de Broglie entered the hanovre. Long letter on this campaign and on the operations of the Marshal of Contades and movements of the French army in prussia, in the region of Coblentz, Cologne and Munster.

With regard to the current situation of business on the Lower Rhine, I can only endorse your way of thinking about many objects, and I fully acknowledge the zeal with which you continually deal with what can contribute to the good of service. In the tems that you wrote to me, you still ignore the movement that m. Marshal de contades makes to make a few battalions to go to the part of coblence and cologne. The arrival of his troops must begin to tranquillize the pais, and he wallows me that if he wishes to be threatened more seriously by the enemies, m. The Marshal of Contade will carry greater help; but in the meantime, you would not be able to seek too much to reassure the spirits; I see by what comes to me from all sides, that he has spread a terror capable of losing everything; I know your courage and I see evidence of your continuous and active attention to what can contribute to the good. It is necessary to increase vivacity in order to animate the zeal of others, and to arrest their unheard-of brother. I have no doubt that the arrival of the Armentary Marshal has also produced a reassurance in the country and that the arrangements he has made do not really cover him with everything that the enemy is going to undertake in the present moment; I am more angry than you that the cavalry that I have caused to walk on the lower rhin has not yet arrived there since the news of the unfortunate day of the 1st. Last month, I did not lose a moment to put it in motion [. He spoke of the need to ensure the safety of the low rhin and for Monsieur darmentières [Maréchal d'armentières] to put "companies together, and to hold the campaign either below or beyond the rhin according to the circumstances. Concerning munster, "all opinions confirm that the enemies have led their detachment to attack this place," but any attack would only be at the expense of the army of the ferdinand prince because the marshal of contades "would have more ease to act" and hope that m. De gayon "will make a good defense and at least occupy the enemies enough time to give m.

The marshal contades that of acting [.] " Lieutenant-General of the King's armies, governor of crecy-in-brie and captain of the guards of the king's gate. Good condition - sent by registered mail.

This item is in the category "collections\letters, old papers\autographs\historical persons". The seller is "*epistole*" and is located in this country: fr.