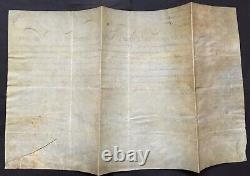 Louis xv king of France document / letter signed Musketeers of King 1752. His reign enjoyed some military success on the European continent, which enabled him to acquire the duchy of Lorraine, the duchy of bar, and Corsica. On the other hand, the france lost control of part of its colonial empire, in favour of British colonial domination: and especially the new france in america. Nice document signed "louis" (secretary), countersigned by the Secretary of State for War voyer dargenson and by the prince of turenne, 1 page grand in folio, versailles, 22 May 1752. Military document of interest to the king's Musketeers. "Louised by the grace of god king of france and navarre. To our beloved nicolas guilmeaux st cyr de st supplet Musketeer in the first company of our horse musketeers serving as the ordinary guard of our person salvation. Taking into consideration the services you have rendered to us on all the occasions presented, and wishing to attest to this our satisfaction we have now committed you to take and maintain the rank of captain in our light cavalry troops, for this is our pleasure. To the left of the document, signature of the prince of turenne, accompanied by the following mention. "Davidfroy charles henri of the tower dauvergne, prince of turenne, great chamberlain of france, colonel general of cavalry. Let us ask the Marquis de Bethune to make him receive him in the capacity of captain, let us order all brigadiers and other cavalry commanders to recognize him in the charge of captain.

" Prince of turenne then Duke of broth, Duke of Albret, Duke of château-thierry, Count of Evreux and Grand Chamberlain of France. Good condition - sent by registered mail. The item "louis xv king of France document / letter signed Musketeers of King 1752" has been on sale since Saturday, November 6, 2021. It is in the category "collections\letters, old papers\autographs\historical persons". The seller is "judi75000" and is located at/in bets.