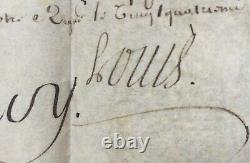 Order given to rolland \"guard of the royal treasury\" to pay and deliver in cash 1738 louis to the \"sr claustrier first clerk of our beloved and feal advise in our council the sr dorry minister and comptroller general of our finances in consideration of the services he has rendered us for this is our pleasure.\" A supplier of the army of louis xiv in horses and ammunition during the Spanish War of Succession, and then taking care of the finances of Philippe v d'espagne, philibert orry was a cavalry captain during the Spanish War of Succession. Thanks to the protection of Cardinal Fleury, whose taste he shared, orry was appointed comptroller general of finance in 1730 and combined this position with that of general manager of the king's buildings from 1736.

The item \"louis xv king de France document / letter signed 1739\" is on sale since Friday, February 12, 2021. It is in the category \"collections-letters, old papers-autographs-historical personalities\". The seller is \"judi75000\" and is located in bets. This item can be delivered anywhere in the world.