Louis XV Autograph Letter Signed To His Grandson, Ferdinand I Of Parma 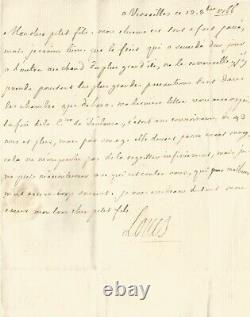 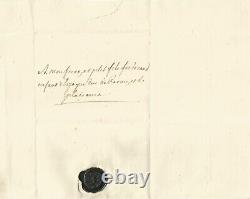 The autograph bookstore of the centuries has specialized, for many years, in the sale of autograph letters, and manuscripts. Autograph letter signed to his grandson, Ferdinand i de Parma.

Address on the fourth sheet. \"I cannot interfere with what is against us. Which by misfortune happened to me too often.

Emotional letter from the king mourning the death of his friend the Countess of Toulouse and delivering his despair in the face of successive mournings striking him. \"My dear grandson, my cold has passed, but I am afraid that the cold that has followed from one day to the other in the heat of the greatest summer will renew it; Jy, however, take the utmost precautions both in the rooms and outside. My last letter taught you the end of the Countess of Toulouse, it was an acquaintance of 43 years and over, but by her age she had to pass before moy. It does not prevent me from regretting it infinitely, but I cannot maccoutum to what is against us, which by misfortune happened to me too often.

I embrace with all my heart my dear little son. The 1760s were marked, for louis xv, by many mournings: after the loss in 1752, of his beloved daughter Henriette de France, and of his eldest the Duchess of Parma in 1759, the king suffered with desolation the death of the Duke of Burgundy. The dolphin's eldest son, aged ten. In 1763, his granddaughter, a married bourbon-isabelle, died, and the wife of the archduke, heir to autriche. Died his mistress as the Marquise of pompadour.

In 1765, the king successively lost his son, louis de France , dolphin, whose moral life was impeccable built, and his son-in-law the Duke of Parma. The old Stanislas king died almost in his sixties.

On September 30 of that same year 1766, the subject of our present letter, her friend the Countess of Toulouse disappeared at the age of 78. In March 1767, she was the dauphine of France, a married husband and sister of Saxony, who married at the age of 36.

Protected the king's love with nesle surs. Check out our manuscripts the autograph gallery of the centuries specializes in the sale and the expertise of autograph letters and manuscripts of the great personalities of past centuries. Purchase/settlement methods we accept the following payment methods: transfers and bank cheques.

The prices shown are in euros and are net. Shipping all our shipments are made in registered mail with insurance at the flat price of 10 for France and 20 for the rest of the world. We can also send private carriers at your request.

However, at your request, we can establish a certificate of authenticity, in addition. The item \"louis xv autograph letter signed to his grandson, Ferdinand i de Parma\" has been on sale since Saturday, October 31, 2020. It is in the category \"books, comics, old books, collectibles\".