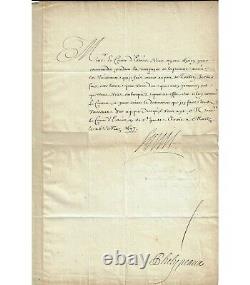 "louis" (secretary) countersigned by phelyppeaux, to the count desterés [maréchal de france]. Address (the left edge as well as two tears are consolidated, original slots). Having chosen you to command during this year's campaign, the ships that I arm at the port of toulon, I make this letter to tell you that my intention is for you to embark for this effect on this called contan, and to follow the destination that jay made of the said ships. Jean ii d'estrées, count d'estrées, born in 1624 on soleure (Swiss) and died in Paris in 1707, was a Marshal of France, great war captain of the navy of louis xiv, who was viceroy of the new france.

G 5448)" has been on sale since Wednesday 30 June 2021. It is in the category "collections\letters, old papers\autographs\historical persons".

The seller is "bibliolibrum" and is located at/en fr. This item can be delivered anywhere in the world.