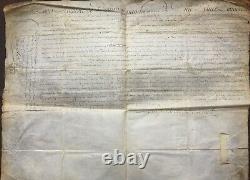 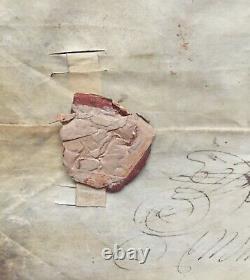 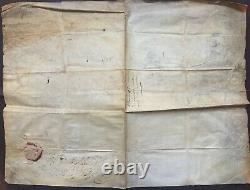 [louis xiv] duc du maine document / letter signed artillery north france & belgique - 1695. Very beautiful document signed by the duke of the maine "louis auguste de bourbon", vellum in plano (60 x 46cm), remains seal hanging on tail, versailles, 1. Patent appointing the Sieur de la Papotière lieutenant de l'artillerie for the Dunkirk area and outbuildings (flander, hainaut, county of namur, artois and picardia). "Louis august of bourbon by the grace of god prince sovereign, duke of the hand and daumale, count of the commander of the orders of the king, lieutenant-general of the armies of his majesty, colonel-general of the Swiss and grisons, governor and lieutenant-general for his majesty in his provinces and of the upper and lower Languedoc, great buttress and captain-general of the artillery of france; to the sieur of the papotière provincial commissioner of artillery, greeting. The king having attached to our great task of artillery the dispensation of rewards and graces to distribute them to artillery officers according to the merit of their services; we have believed that the vosters made you worthy of the first that you serve in the artillery corps both as extraordinary commissioner, ordinary and provincial you have filled with great valour and courage all the jobs that have been entrusted to you; to these causes and alders [we call you] our lieutenant of artillery in the department of Dunkerque cities and exits and dependencies to command there under our orders the department general of flandre haynault county of Namur artois and picardie authority over everything that will depend on said artillery in the range of the department of Dunkerque and dependencies be for the fact of the fonts of the parts and works of foundry, mounts and crews that composition of gun and musket powders that are in the magazins than those that will be brought there and also to be able to all things that will happen concerning the act of artillery.