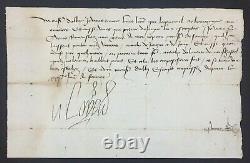 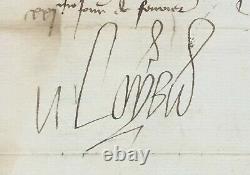 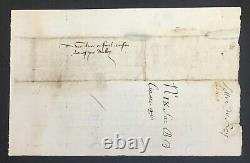 Louis xi king of France - letter signed war against the Maximilian emperor for the Burgundian state of charles the reckless - 1478. Its policy was constituted by immense diplomatic activity and the strengthening of royal authority against the great feudaries, supported by the alliance with the people. His reign saw in particular the attachment of several great principalities to the royal domain (duchy of Bretagne, dukes of burgundy, maine, anjou, provence and forcalquier) and the signature of the treatise of picquigny (1475) with the king of angleterre Edward iv who permanently ended the hundred-year war.

Louis xi is indisputably a very great king of France. After the death of charles the reckless (1477), louis xi invaded the Burgundian state and occupied its territories. Maximilian Emperor of the holy empire married to the daughter of the fool, the sum to restore to him his territories triggering a war of six years. Louis xi pays maximilien the peace demanded of him (Treaty of Arras -1482): duchy of burgundy and picardia return to the royal domain, marguerite of autrich brings in dowry the artois, the franche-county, the counties of auxerre, charolais, and mâcon all these territories passing immediately under French administration. Important letter signed "loys", plessis of the park, 21 February [1478], to louis damboise, bishop dalbi, countersigned by parent stone, 1 page oblong in-8 with address.

Important testimony on the war and ruse used by louis xi against the Maximilian emperor for the control of the territories and the Burgundian state of the reckless, and to complete the territorial unity of the kingdom of france. Letter of a political and military nature: louis xi, discontented with the conduct, or at least with the bad success of georges ii of the trembling, at the center of the trouille, gave the government of the frank-county to charles de chaumont, brother of louis damboise, bishop dalbi, and of damboese hugues, lord of graulifet. While charles de chaumont commanded the French forces against maximilien ier, louis xi employed louis damboise in various negotiations; he instructed him to detach the Swiss from the party of maximilien and to stir up enemies from all sides, in order to divide his forces. Dalby, I am sending you a letter that the general of burgundy my envoys and as some as stone of bleeds has written to him.

I beg you that you remorse to the people of my nephew, Mister de Savoie, that they do not allow any food to pass to those of joiner and of juice, and also that they advise which monks that they can so much fere to the ceulx of the count of ninechastel that they don't bail on them, and this will prevent them loudly and will be well esbahis, and farewell mister dalby. Written to the park's plessis on the 21st. Noble, bishop of albi, son of raspberry stone lord of chaumont, adviser and chamberlain of charles vii. Lord of Craon and Jonvelle, Count of Ligny, knight of the order of Saint-Michel during the first promotion in 1469.

Lord of chaumont, of sagonna, of mellitus, of charenton, of the governor of the Ile-de-france, of champagne and of burgundy, adviser to the king, chamberlain and knight of the order of Saint-Michel. Jougne and joux, the fort of joux in free-county, in the district of pontarlier (doubs). Letter published in "letters de louis xi, roi de france", volume 6, renouard, 1898, pp. Very good condition - sending by chronopost.

Certificate required for certain destinations, contact me before any order. The item "louis xi roi de france letter signed etat de charles the reckless 1478" has been on sale since Saturday 27 March 2021.

It is in the category "collections\letters, old papers\autographs\historical persons". The seller is "*epistole*" and is located at/in bets. This item can be shipped to the following country: European Union.