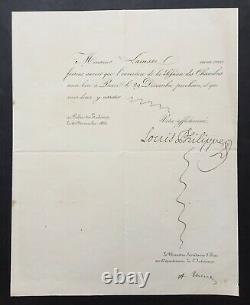 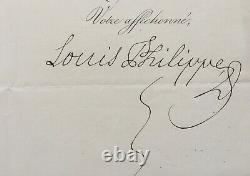 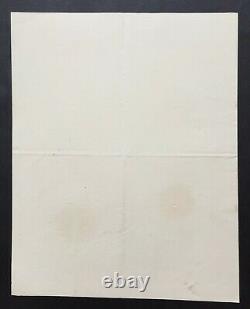 Louis-philippe King of the French - adolphe thiers -letter signed 1835. He reigned from 1830 to 1848 with the title of \"King of the French\" at the head of a kingdom in profound social, economic and political changes. Louis-philippe by the Monarchy of July tried to pacify a nation deeply divided with the weapons of its time: the establishment of a parliamentary regime, the accession of the bourgeoisie to manufacturing and financial affairs, allowing an economic boom of prime importance in France (industrial revolution). He played a major role in the establishment of the political regimes that followed the failure of the restoration in 1830.

He helped establish the July monarchy, of which he was twice president of the council. Orleanist, a liberal supporter of a constitutional monarchy in which \"the king reigns but does not rule\", he distanced himself from the king on foreign policy (crisis of 1840) and criticized the intransigence of guizot that provoked the revolution of 1848. He joined the republic and became head of the executive and then the first president of the third republic.

Letter signed by louis-philippe and thiers, bets, palace of the tuileries, November 20, 1835, concerning the opening of the session of the rooms. Beautiful document, very good state sending by registered mail. The item \"louis-philippe king of the French - adolphe thiers document letter signed 1835\" has been on sale since Saturday, March 20, 2021. It is in the category \"collections-letters, old papers-autographs-historical personalities\". The seller is \"epistole\" and is located in bets.