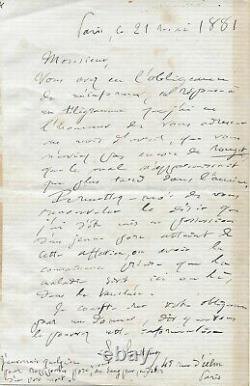 Paris, May 21, 1881; 1 page in-8. Donglet traces on the slice. Pasteur, who had begun the study of viral diseases, embarked on new research on the mullet of the pig lining the veterinarian of bollene achille maucuer. \"You had the strength to minform in response to a telegram which I had the honour of addressing you in April, that you did not yet have red mullt that the evil was only born later in the year. Let me renew to you the desire that I have to be put in possession of a young pig with this infection, or to have the precise knowledge that the disease is, here or there, in the vaucluse. I count on your obligingness to give me, as soon as you can this information. I'll send someone [the red doctor] to bring you back, a pig word dun a live pig of blood, or debris from a dead pig. Vaccination of pigs is a link in the chain of prestigious pastoralist discoveries. After veterinary studies in lyon, achille maucuer set up a small bollene laboratory in the vaucluse.

While pastor worked on \"the difficult problem of the etitiology of contagious, infectious and virulent diseases\" (pastor's address of February 9, 1877 to the minister of public instruction) who led him to study anthrax and septicaemia, maucuer, who knew the work of pastor, lalerte on the ravages caused by the red mullet of the pig in the vaucluse. But pastor is fighting several battles, he starts a study on hen cholera, on August 8 at the congress in London, he presents the masterful study on his method of turning deadly viruses into vaccines. However, he wants to attack the red mullt of the pig while conducting his research on rabies prophylaxis head-on. In May 1881, a pastor was concerned about whether there was still disease in the vaucluse, as recounted in our letter to maucuer.

Indeed, it is a disease that seems to be revealed at this time of year. In December 1882 he estimated that a vaccine would be found next spring. The first vaccinations began with caution in May 1883. On September 4 of the same year Achille maucuer rejoiced in writing to pastor: \"the happy effects of vaccination are becoming more and more evident every day.

\" The item \"louis pasteur autograph letter signed red mullt vaccine of pork\" is on sale since Friday, December 11, 2020. It is in the category \"books, comics, old books, collectibles\".

The seller is \"cyril2472\" and is located in Lyon, Rhone-Alps. This item can be delivered anywhere in the world.