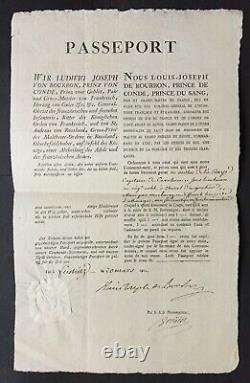 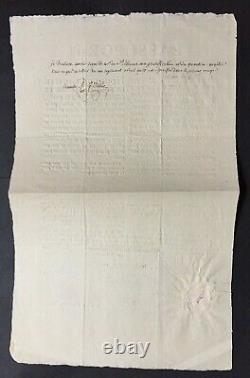 Louis josep de bourbon, prince de condé document / letter signed royalist army 1801. Head of the army of the emigrated during the wars of the French revolution, until 1801. Prince of blood and great master of france. Document / letter signed, feistritz, 20 March 1801, with its title "we louis-joseph de bourbon, prince de condé, prince du sang, pair and great master of france, duke de voitcolon général de l'infantade française et étrangère, knight of the orders of the king of france", 1 page in-fol. Passport in French and German in favour of "Mister de la craye, captain of cavalry to the noble regiment on horseback going through marbourg in various places of lallemagne".

Born in Dijon on 15 February 1748, denis marguerite millot de la craye began his military career on 12 May 1762 as a pupil at the dauxonne-bapaume artillery school. 1773 he incorporated as second lieutenant the regiment of bourbon-cavalerie, now bourbon-dragons. Promoted lieutenant in 1775, he continued his career in this regiment and received a knight's badge from the Order of Saint Louis. In October 1791 he emigrated to join the army of the condé prince in worms.

From 1792 to 1801 he participated in all battles in the army of princes as captain of cavalry. He finally left the Royalist army in August 1801 to retire to his native Burgundy. Good condition sent by registered mail. The item "louis josep de bourbon, prince de condé document / letter signed army 1801" has been on sale since Sunday 10 October 2021. It is in the category "collections\letters, old papers\autographs\historical persons". The seller is "judi75000" and is located at/in bets. This item can be delivered anywhere in the world.