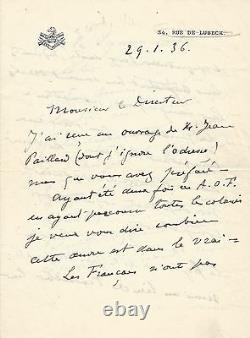 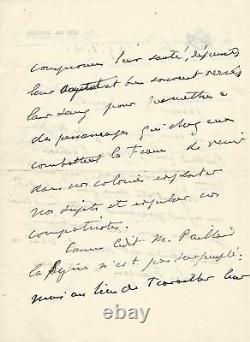 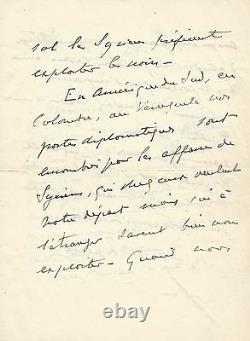 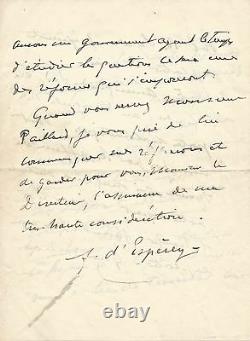 The autograph bookstore of the centuries has specialized, for many years, in the sale of autograph letters, and manuscripts. Manuscripts of those who made the glory of the arts, literature, our history and science in the past centuries. Four pages in-8 on paper to his weapons. Interesting vision of the marshal on the situation of the French colonies. Director, I received a book of mr jeans (which I do not know the answer) but which you have prefaced. Having been twice in A. F, having traveled all the colonies I want to tell you how true this work is: the French have not compromised their health, spent their money, often shed their blood to allow characters who at home fight France to come to our colonies to exploit our subjects and expel our compatriots. As Mr paillard says Syria but instead of working their soil the Syrians prefer to exploit the blacks.

In South America, in colombia, in Venezuela our diplomatic posts are cluttered with the affairs of the Syrians, who at home want us to leave, but who abroad know how to exploit us. When we have a government that has time to study the issue, that will be one of the answers that will be required.

Paillard, I beg you to give him my thoughts and to keep to yourself, Mr. Director, the assurance of my very high regard.

The item \"louis franchet desperey / autograph letter signed on the French colonies\" has been on sale since Tuesday, April 25, 2017. It is in the category \"books, comics, old books, collectibles\".