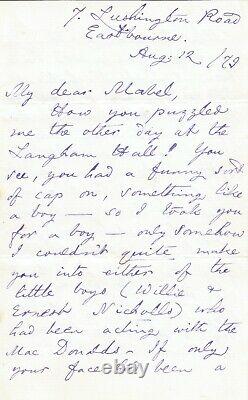 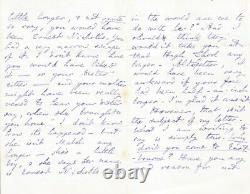 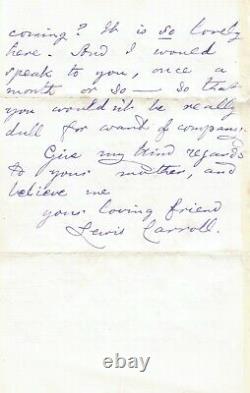 Four pages in-12° pink ink. How intrigued you were the other day in langham hall!

Extraordinary letter, filled with nonsense and typically carrollian dabsurde, to the young mabel, her new 10-year-old friend-child. You know, you had a funny hat on your head, something like a boy's hat, so I thought I was a boy, but for one reason or another I couldn't recognize in you one of the little boys (willie and ernest nicholls) who played with the mac donalds. If only your face had been a little longer and not quite as pink, you would have been ernest nicholls. You don't know how beautiful you are. I don't know if you would have liked that, or your sureness, and your mother could have been really upset to hear about you telling her, by taking you home: "I don't know how this happened, but it's no longer mabel, it's a little boy and she says call ernest nicholls; what the hell are we going to do with it?

And I don't think we'd want you in college anymore. In short, it would be very embarrassing if your face had been a half-inch longer; I'm glad it wasn't. Besides, that's not the subject of my letter.

What I want to tell you is simply this: why don't you come to Eastbourne? Do you have a good reason not to come? It's so charming here. And I'd talk to you once a month more or less, so you won't really be bored for lack of company.

Present my tributes to your mother and always believe me your affectionate friend lewis carroll. Letters to children occupy a very special and predominant place in the correspondence of dodgson, since associated, more than any other, with the very essence of his literary work. We also know, thanks to the various volumes of published correspondence, that a very small proportion of letters (just two out of a hundred) bear the mythical signature "lewis carroll", since it always tried not to reveal itself, never referring to its work in public.

While the name of the young mabel amy burton appeared subreptitiously in the paper kept by charles l. Dodgson, there was no biographical evidence suggesting that this encounter had augured for these privileged relations of the author with his "friend-children", until the publication, in 2008, of some fifteen unpublished letters to Mabel and his family. Indeed, by 1898, the very year of dodgson's death, Mabel had refused to satisfy the request of the first declared biographer of dodgson, and to publish their correspondence. She was later explained: "When Lewis carroll's nephew wrote his uncle's life, he wrote to ask me if I would entrust him with the letters I had because he wanted to print various passages. I refused and this is the reason: one day, at school, I had brought one of the letters received from him that I had shown in the round, but when I told him that I had done this, he replied to me: "My child, my letters to you are for you and for no one else.

Thus, it was on August 16, 1877 that Mabel - 8 years old - entered the life of C. Dodgson as evidenced by these few lines written in the latter's diary: "Goed to Lembarcadère in the evening and made another happy encounter. My new friend is called Mabel Burton.

She seems to be about 8 years old I've never been friends with a child so easily and quickly. The next day, he added: "Going to the beach around 11 a.

And soon saw my girlfriend coming last night, mabel and I spent some time with her and her cousin. A week later, on August 25, he wrote to Mabel's father without knowing that he had died for several years: "Sir, I hope you will excuse the freedom I take by addressing you, as well as the freedom I took a few days ago by bonding with your little daughter, but I believe that even a man who would not, like me, be a great lover of children, could not fail to be attracted to her. As I wish to place for her, where she lives, a small book (which I have often given to young friends), I undertook two expeditions, in vain, to find out where she stayed if you allow me to offer her this book, would you have grieved to tell me whether I should send it to London or, if not, to what address. The book sintitulates the dalice adventures in Wonderland. Our letter bears witness here, once again, to the sharp sense of dodgson for labsurd, as well as to his mastery of nonsense, humour and the principle of reversal, so widely deployed in his literary work. Starting from a banal observation on the mabel hat, he amuses to play the confusion of genres and the identity question, moreover fundamental in the fantasy-magorical construction of the dalice universe. Mabel will give some details about the context of our letter: "Lewis carroll was an intimate of george mac donald and his family (it was to them that he read for the first time in its entirety his alice in the land of wonders) and when they presented the second part of the pilgrims progress at langham hall, my mother, to respond to the view of l.

Carroll, authorized my super elder to take me with her after the play, we met lewis carroll, and I remember that he teased me by calling me "little boy". I was wearing a black velvet cap with a pompom on my side, and lon had cut hair so short that I really had to appear for a boy. I thought I had to tell him then who I was, after which, a few days later, I received this deliciously absurd letter. As of 1885, ties with mabel became distinctive.

As a teenager, the magic of her childhood had passed in the eyes of lewis carroll. My dear mabel, how you puzzled me the other day at the langham hall! You see, you had a funny sort of cap on, something like a boy - so i took you for a boy - only somehow i could leave make you into either of the little boys (willie & ernest nicholls) who had been acting with the mac donalds. If only your face had been a little longer, and not left so rosy, you would have been ernest nicholls. You had a very narrow escape of it.

I dont know how you would have like it - or your sister either - and your mother might have been really vexed to hear your sister say, when she bought you home i dont know how its happened but she isnt mabel any longer - she is a little boy, and she says her name is ernest nicholls : what in the world are we to do with her? And i should think they would take you at that high school any longer. However, that isnt the subject of my letter. Why do you come to Eastbourne?

Have you any good reason for not coming? It's so lovingly here.

But i would speak to you, once a month or so - so that you could be really dull for want of company. Give my kind looks to your mother, and believe me your loving friend lewis carroll. "Lewis carroll unreleased letters to mabel amy burton and his parents." Check out our manuscripts The Autograph Gallery of Centuries specializes in the sale and expertise of autograph letters and manuscripts of the great personalities of past centuries.

Purchase / payment methods we accept the following methods of payment: transfers and bank cheques. The prices shown are in euros and are net. All our shipments are made in registered mail with insurance at a flat rate of 10 for France and 20 for the rest of the world. We can also ship by private carrier at your request.

Conditions of sale in accordance with the practice of the international league of the ancient bookstore, we accept a guarantee of return within 14 days. The return costs are borne by the buyer. About all the pieces proposed are originals whose authenticity we guarantee. Our invoices serve as proof of authenticity of the parts sold. However, at your request, we may issue a certificate of authenticity, in addition. The item "lewis carroll autograph letter signed lewis carroll to mabel amy burton 1879" has been on sale since Saturday, October 17, 2020. It is in the category "books, bd, magazines\old books, collection". The seller is "juniennn0" and is located at/in lyon. This item can be delivered anywhere in the world.