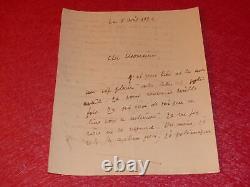 Autograph letter - French journalist & writer xix/xxe. French action - king's camels - anti-communism. I received yesterday and read with great pleasure your letter and your article; I thank you a thousand times, I am delighted to see that this book has interested you; I do not read anything at the moment, at least the Greek authors remain; I am controversial with the communists, we have managed to group in broad angles on the anglin, 150 men, and to surprise the communists who accompanied sadoul; the hand was remarkable; the resounding of it in our red region is considerable; I knew that in a way of reprisals. I was to be attacked one night; I immediately threatened the leaders to break their mouths in broad daylight. They then took a victim attitude; it is from the highest comic...

To explain the context of this rare letter.. the two conferences of sadoul jacques at angles-on-the-anglin (1926).

1 - henri and blissed sadoul had a secondary residence at angle-on-anglin. Their jacque son, a lawyer at the betting bar, was interested in politics. In 1912 and 1914, he ran for the general election, choosing, and the district of Montmorillon, and the unified socialist label. If he failed to be elected, the scores he obtained were very honourable.

During the conflict, he became one of the collaborators of the socialist minister albert thomas, who sent him to Russia to try to keep the country in war alongside the allies (1917). In contrast to his mission, Captain Sadoul deserted his rally to the Bolshevik revolution. Naturally sentenced to death by the French justice and removed from the bar, Jacques sadoul still returned to his country in 1925. The criminal sentence handed down against him was overturned, the Bar Association reinstated him into his ranks, decisions of the most generous, of the most healthy, but which divided public opinion. Many accused sadoul jacques of treachery, of cowardice.

Traitor to his homeland, he had strictly been, since he had abandoned the nationalist ideal to serve a potentially greater ideal, the humanist ideal. Let it go, absolutely not, because it would have been more comfortable for him not to leave the horizon blue uniform. 2 - to conjure up this hostile atmosphere around him, he set off on a tour of justification lectures. One of them was planned at angles on February 28, 1926.

I hear his parents set him up. They were handing out gifts to the children of the village, gathering the kids around their faces.

We even assumed that our communist had new electoral ambitions in Montmorillonnais! James sadoul had the right to speak, the legitimacy to defend himself, however, the fact of showing his desertion as a fact of glory in front of widows, orphans, mutilated, inconsolable parents, it conveyed a rather inconvenient, rather disrespectful way of acting.

3 -justly, it was on February 28 that, at the very beginning of the afternoon, a few cars arrived discreetly, a small convoy chartered by the camels of the king of the High-Vienne. In a meadow, sheltered from glances, they find their fellow poitiers. The conference is held at the Golden Lion Hotel. A large crowd, about 300 people, and among this crowd, 150 of the king's junkies, a seasoned, disciplined, well-informed troupe! On the stage and in the room are a contingent of a dozen communists, sadoul jacques is also present. A certain philippe, comrade of the poitiers, took the floor first by asking the assembly to appoint a president of the bureau. The name sabourin is acclaimed. Sabourin joins the stage, opens the session. The two accessors are also designated, but we already feel that the meeting escapes from its organizers. So, in the audience, m of the debuterie, which is a veteran decorated with the cross of war and the legion of honor, rises, moves to the front row and launches: we want to listen to the communists, but that sadoul, the sadoul traitor comes out immediately! On behalf of the veterans, in the name of the dead for the homeland, we forbid him to speak! Philip and several comrades rushed into him. They do not have time to hurt him, for it is a human tide that shakes, falls upon them, prevails over his passage. The communists are scattered, sadoul, who was wounded, takes refuge in the kitchens of the hotel, then flees through fields and gardens before reaching a vehicle that awaits him at the exit of the village, road of turn. In the golden lion's room, philippe and another communist express themselves, but soon, the roller-compressor of the camels crushes the whole debate. At the end of the meeting, the following agenda was adopted by acclamation: the assistants, ignoring any idea of a party and placing themselves solely at the patriotic point of view, were determined to push back communist conduct by all means and vigorously wield the anti-French opening of sadoul.

Meanwhile, in the courtyard, philippe still makes resistance. He waved his fists in the direction of some adversaries facing him, he said to them: yes, sadoul is a traitor! Born bourgeois, having everything he needed to enjoy life as a great bourgeois, he came to the people; he joined the workers. 4 - around 5 p.

, the victorious army of the king's camels marched in row by four in the corner streets, finished its march at the cemetery of the high city to go to greet the dead children of the land victims of duty, wrote dupont-huin, the poor dead, they, did not ask at all, replied simonnet louis. And George Gaudy was surprised to notice, among the men signing in front of the graves, three communists who, trained by this example, had followed us. 5 - What was the attitude of the corner inhabitants during these events? Like simonnet louis, one would be tempted to think that they were witnesses and more or less victims of this backward jacquery. Dupont-huin and Georges Gaudy attribute a more active share to them.

The latter immortalized the words that one of our farmers would have said to him: you come and yell sadoul. If you could strangle him! 6 - a new meeting is scheduled for 5 November 1926. Not existing during the events of 28 February, the forces of law and order are this time on the alert.

Fortunately, a group of cyclists wearing the communist party's red uniform arrives in the village. Intrigued, nervous, the gendarmes question these lousy individuals.

The young people replied that they were from the Châtelleraudese, that they allowed themselves a break before joining the sports parties of Saint-Savin. Oh, well, more fear than evil! This time, 200 people came to listen to sadoul jacques, but at the very beginning of the conference, the mayor of angles, marc delage, warns that he does not want trouble in his commune. Indeed, there are no incidents that sparkle the debate. However, like the first time, a procession is formed and goes to the cemetery. The honours are given to those of our children who fell for france. The honors are returned to them, not life. The week of March 14, 1926, no.

Is a French writer and journalist. Mobilized at the 57th Ri from February 1916, he fought there until the end of the Great War. After the war, George Gaudy began a career as a writer and joined the French action. He publishes his memoirs in 4 volumes.

The greenun shell holes (1922). The Way of the Ladies on Fire (1923). The agony of Mont-renaud (1921) and. The saconin drama and the epic on the ingone (1930). This fighter became a writer, journalist and speaker of the French action travelled extensively in Germany in the 1935s and wrote articles on the rise of Nazism in this country.

He also covered the beginnings of the civil war in spain. In 1939, he returned to service and was mobilised at the 107th Angoulême Rie.

At the end of 1940. He stacks up for the african army and participates in the campaign of italia. His testimony at the Maurras trial will cost him his captain's stripes and send him back from the army.

From 1950, back from coming, where as part of the denazification, he was in charge of the archives of the French mission in Germany and Austria, his name reappeared in the newspaper aspect of the france. Of which he will be editor-in-chief for a while. Georges Gaudy was a member of the steering committee of the French action.

And president of the marius plateau association (af veterans). The france sought a man: ten days with the king's son (1934). Battles without glory: memories of an infantry officer, May-June 1940 (1941).

1 sheet of white paper. [Georgian origin or louis boulay]. This item is in the category "collections\letters, old papers\autographs\historical persons". The seller is "amideslivres" and is located in this country: fr. This item can be shipped to the following country: whole world.