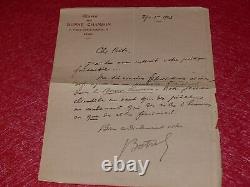 [sign autograph letter - French writer xixe - Bretagne]. To the head of the work of the right song.

Dear poet, I have read with interest your poetic fantasy; my very sincere congratulations and my deep regret that I cannot insert it in the right song; our young clientele wants only pieces containing only roles of men or only female roles... French song, Breton song folkloric, patriotic. Jean-baptist-theodore-marie botrel (born 14 September 1868 in Dinan). And died on 26 July 1925 at pont-aven, where he was buried, was a French singer-songwriter. He's the author of.

Born in Dinan, a Breton father from broon, and an Alsatian mother. He lived in Saint-méen-le-grand at the parson, at his paternal grandmother's fanchon until the age of seven, then joined in bets where his parents had left some time before in an attempt to make a fortune there. Originally from Upper Bretagne (the part of the Bretagne where one speaks Gallo, a Romanesque language), he learned Breton (speaking in Lower Bretagne) only late, and almost all of his work is in French. On 19 April 1891 in bets with helene lutgen known as "lena".

(b at Beaufort in Luxembourg on 18 January 1861 and died at Pont-Aven on 11 July 1916). With his second wife, Mailise, he has two daughters, including the eldest, lena, married the writer Emile danoën, and the youngest, Janick, was the mother of the renaud detressan singer.

The latter has taken up some of his grandfather's songs in the 2009 family airs recording. By the age of 16, he was part of an amateur theatre troupe where he played his first play dagger.

He also began writing a few songs and released his first print the little biniou at the age of 18. She had no success, as another biniou had already been released a few years earlier. At the same time, he tried several trades, including apprentice locksmith and confessed. He then enlisted for five years in the army and on his return worked as an office employee at the Lyon and Mediterranean betting railway company (plm). He plays in parallel in a small theatre troupe, near, among others, the one who would become the dranem singer-fantaisist and continues to write some songs, which obtain little success.

The dreyfus affair and the league of the French homeland. At the time of the dreyfus affair, such as the painters edgar degas and august renoir, writers stone louÿs and frederic mistral, etc.

Botrel belonged to the league of the French homeland, a moderate anti-dreyfusard league. But one night, in a famous Montmartre café-concert, the black cat, he replaces an absent singer. Botrel was inspired by the stone work loti fisherman of Islande for the theme of his song.

She remained in the repertoire of felix mayol until her death in 1941. One will notice that he sings "I love paimpol and its cliff", while at paimpol even there is no cliff.

In fact, botrel did not know paimpol when he created the song and would only come there once in 1897 for "the forgiveness of the Icelandics". By creating his song the red cholet handkerchief and singing it in this city in 1900, botrel inspired a patron-tender, leon maret, to create this handkerchief which became the symbol of the city. When the last cholet weaving was closed in 2004, the municipality bought a loom to weave the red handkerchief in the textile museum. Title from the songs of the flower of lilies that pay homage to the vendeans of the sale. Military and maiiot cabbages, Normans and Bretons.

His patriotic songs from the time of the great war, including the famous p'tite mimi, will be remembered. In May 1915, theodore botrel wrote the poem the virgin of the bell tower of Albert, in tribute to them.

Let's Bretches of the 11th Corps fallen in battle in front of this Picardy town. He was an assiduous host of holy-maximum (var) during several winters. In 1903 he sailed for new york with his wife Helene on board the ship. Theodore botrel settled on deck-aven from 1905, staying from 1907 to 1909 in the castel-brize villa overlooking the left bank of the aven before building his own house, called "ker-botrel". He was at the origin of the creation in 1905 of the first Breton folk festival, the "pardon of the budding flowers".

He lived at Pont-Aven until his death in 1925 and was buried there. 1 sheet of white paper. [Georgian origin or louis boulay]. Folds, small tears or creases.

On the right side of the sheet, leg. Sold as described, as found.. this item is in the category "collections\letters, old papers\autographs\historical personalities".