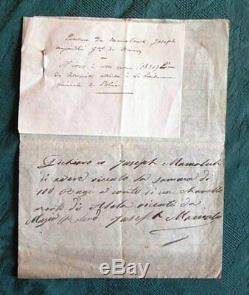 (around 1830) debt recognition written in Italian, under the pseudonym of Mamelouck Joseph. Pinned handwritten note explaining this note. 1 page (21x17) under plastic cover.

Placed as a military interpreter with the Commissioner General of Police, he performed several missions to the leaders of various remote tribes, who opened the career of arms. Appointed captain in the 1st regiment of chasseurs of Africa on May 25th, 1831, he was then promoted to the position of khalifa with the agha of the Arabs. The item \The seller is \This item can be delivered anywhere in the world.