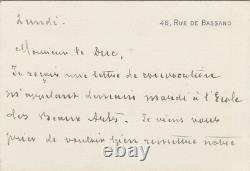 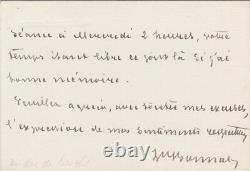 Autograph letter signed to Albert de broglie. Beautiful letter in which the artist, who realized the portrait of the 4th Duke of Broglia, wishes to postpone a session. On March 26, 1880, the time devoted an article to the workshops before the show and stated that "Last year, Mr.

Bonnat painted at the same time victor huto, m." was perhaps the reason for the postponement of his session? The political and literary annals recount a funny anecdote during the realization of this portrait: "Friendly relations, or rather subsidiaries, were established, therefore, between the portraitist and his glorious model [victor hugo].

Léon Bonnat became the frequent host of the small hotel on avenue d'eylau. He had dinner there several times a week.

He saw everything that bets, Europe and the universe were prominent and extraordinary. There he found lesseps, who had returned permanently in grace and to whom victor Hugo served as godfather at his reception at the French academy. He especially remembers a meal that was attended by gambetta, henri breakage and a few less important courtiers. The god made him sit in front of him, at the other end of the table. He suddenly asked him, "Who are you painting at this hour?

" Bonnat replied, quite naturally: - I paint the Duke of Broglia. The superhuman voice groaned: - wretched! Bonnat did not know whether this imprecation was addressed to the Duke excreted or to his humble person. It was a concert of indignant shouts. Put him in front of the face, cried henri break, an iron gate, the gate of the dungeon where we should lock him.

Gambetta exclaimed: - No, no, violence is bad counselor. And, badinant, he continued: - the duke of broglia produced a very beautiful book: the king's secret. He deployed an admirable talent to transform his ancestors' scoundrels into virtues.

The next day, when léon bonnat met face to face with the minister of May 16, he could not stand by touching him a word of this scene, he refrained from describing it in detail and told him only what could caress his self-esteem: - Monsieur le Duc, gambetta gives you a lot of talent. He declares that the king's secret is a masterpiece.

Did he feel secret satisfaction with these praises from broglia? He returned, with the light zezaiment that lent his speeches such a special flavor: - I gave him his politeness. Gambetta is a very good speaker; he is equal to Mr Berryer.

It was one of the few occasions when the Duke of Broglie did about justice to his terrible enemy. (15 October 1905) the opinions diverge on this portrait, a photographic print of which is kept at the Bonnat-Helleu Museum. The letter of art considered him "one of the least happy canvases of m. 1885) while for katow's shoulder of the gil blas, "the portrait of the Duke of broglia is certainly one of the most beautiful pages of m.

The Duke is standing entirely seen from the face; the head is drawn and shaped like the ancient statuary. The face is sparkling with life, the oil is deep and frank, the whole is of a rare coloring power. I receive a letter calling me tomorrow Tuesday at the school of fine arts. I come to ask you to postpone our meeting until Wednesday 2 a.

, your time being free that day if I have a good memory. Please accept, with all my apologies, the expression of my respectful feelings. English and Russian translations available on request. Third Republic at peace (france).

Léon josep florentin Bonnat is a French painter, engraver and collector of art. He was thus owed about two hundred portraits of personalities of his time.

He was appointed head of painting workshop from 1888 to 1905, at the school of betting fine arts, where he trained many students including toulouse-lautrec, dufy and frieze. Duc de broglie is a French historian, diplomat and statesman. Monarchist, he is under the third republic one of the figures of Orléanist royalism and liberal Catholicism.

The invoices and cards we issue are instead of a guarantee certificate. France free shipping private carrier on request. Shiltonson Rare Books & Manuscripts. This item is in the category "collections\letters, old papers\autographs\historical persons".