Le Corbusier / Autograph Letter Signed About The Fate Of Paris. 1940 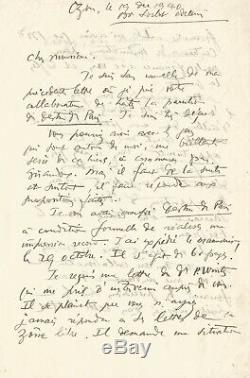 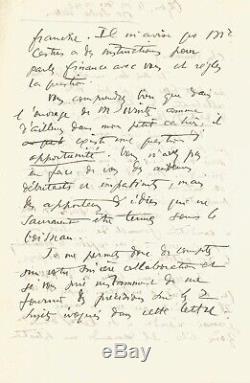 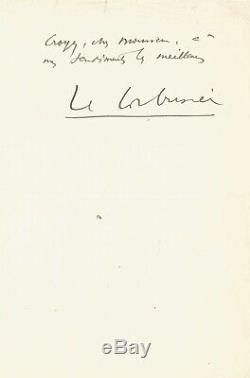 The bookstore autograph centuries has specialized for many years in the sale of autograph letters and manuscripts. Autograph letter signed to his editor, Fernand Sorlot. Superb letter on the publication of the fate of Paris during the occupation. You could do with the people who are around me, a brilliant series of books, starting with Giraudoux. But it must be the result and especially respond to the proposals.

I entrusted you to paris destiny formal condition of achieving a record impression. Jai sent the manuscript on 29 October.

It comes to 60 pages! I get a letter from dr p. Winter, who asks me to involve itself with you. He complains that you nayez never answered his letters of the free zone. He asks a straightforward situation. Castres instructions to talk finances with you and resolve the matter. You will understand that in louvrage m. Winter, as dailleurs in my little notebook, there is a dopportunité question. You do not have in front of you novice authors and impatient, but contributors of ideas that can not be kept under wraps. I would therefore count on your sincere collaboration and I urge you to provide me with information on the two topics discussed in this letter. In 1941 publishes the Corbusier. This booklet of 60 pages, reflection on the construction and development of paris, is for the government of Vichy. He reworks it until mid 1942, when he left it carefully gingham and his friends from the extreme right. Francis pierrefeu, Hubert lagardelle, winter stone. He founded in Paris the ASCORAL (builders meeting for architectural renovation) will work during the German occupation. Was the founder of the new Latin editions in 1928 and the publisher, at the request of Charles Maurras, unauthorized French translation of Mein Kampf in 1934. The case earned him a lawsuit against Hitler.

During World War II, Winter wrote in the collaborationist press and became, in 1944, Inspector General of the work of the government of Vichy. Friend of Le Corbusier, he is the neighbor jacob paris street, he prefaced one of the volumes of his complete works. Check our gallery autograph manuscripts of centuries specializes in the sale and the expertise of autograph letters and manuscripts of the great personalities of the past centuries. Buy / payment methods we accept the following payment methods: bank transfers and checks. All prices are in Euros and are net.

Shipping All shipments are made by registered mail with insurance at fixed price of 10 for France and 20 for the rest of the world. We can also carry out shipments by private carrier to your request. Conditions of Sale that complies with the International League of Antiquarian Booksellers, we accept a guarantee of return within 14 days. The return costs are borne by the buyer. About ViaMichelin proposed pieces are originals which we guarantee authenticity.