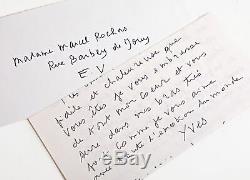 Yves Saint-Laurent - autograph letter signed in Helene rochas: ... It's a crazy life that devours everything.

This letter of Yves Saint Laurent is a beautiful and rare declaration of friendship to Helene rochas, he counts among his close friends for many years. In 1984, the designer is at his peak, becoming the first fashion designer to be a retrospective of his life through this exhibition held at the Metropolitan Museum of Art New York last year. For its part, the recipient of the letter helen rochas manages a master hand his house perfume, which became under his leadership a true industrial empire with the international success of his creations \It imposed an informal face of the brand of his friend, an influential ambassador for the fashion house of Yves Saint-Laurent, to which it will always remain true.

The designer did much to create the image of \asks the prince rainier iii. In return, helen rochas knew select masterpieces from the collections of Saint Laurent ready to wear: suits, furs, Slavic-inspired dresses remained legendary in the history of fashion. At that time, they are both at the head of a line of perfume successful since the launch perfumes Yves Saint Laurent in 1971, and also share the love of Paris left bank.

Saint-Germain-des-Pres, they both lived for over forty years, served as inspiration for the famous collection of ready-to-wear \in the apartment of Helene rochas barbey rue de Jouy, where we saw passing Aragon, Paul Eluard, madeleine renaud and Jean-Louis Barrault, marie-louise Bousquet, director of Harper's bazaar, Viscountess marie-laure de noailles, salvador dali, max ernst and man ray. Yves Saint Laurent and Helene rochas embodied for nearly half a century, the golden age of Parisian luxury, and their friendship lasted until the death of the designer in 2008.

The tone of the letter is decidedly dark, although 'exudes a genuine attachment to his longtime friend. Torn between the allowance and the memory of happy times spent with her, the fashion designer told Helene rochas? The only thing that matters to me is you and me and this has not changed. You are always sincere friend and wonderful that I regret.

Represent the last years of happiness I had? The letter demonstrates an absolute sensitivity and sincerity, and reveals a surprisingly flamboyant epistolary style, as already remarked Diana Vreeland, curator of the retrospective Yves Saint-Laurent to put? He: has a way of opening up In His writing. And it's Such a contrast. We he talks you see, it's very simple, it's very Concentrated. Purpose When He writes he really gallops through the words? He has a way opened in his writings ... And it is such a contrast.

When he speaks, you see, it is very concise. But when he wrote he really gallops among the words? It is known to speak little, he wrote here a lot and does not hide his sadness and admiration?

I am very moved by writing you. I could tell you lots of things now become banal and insipid? Paloma Picasso describe it as \Absolutist in friendship and in his passions? \Yet the letter plunges the reader into a tumultuous privacy - a successful fashion designer and impressive productivity hide a dark reality, constant pain, he confided to her friend in a few lines?

I'm sad not to see you as I am tired ... But do not think that it is final. I go through a very bad passage healthy and it arranges. We discover exhausted by the excesses and hard work, four collections a year of haute couture and ready-to-wear have brought severe damage to his mental and physical health.

To address its chronic overwork, he retired as every year in the Moroccan haven of peace? It's a crazy life that devours everything?

Yves Saint-Laurent will escape time to a few days before the parade of his autumn-winter collection, in his famous \His letter ends with a farewell overwhelming force? Dearest helen, the loyal and warm friend that you are I embrace you with all my heart and you in greenhouse vibrant testimony of an unbreakable friendship, in the tumult of life of fashion designer Yves Saint Laurent, who is engaged in this letter to a friend whose eclecticism and curiosity made her an essential model of Parisian fashion. English translation available upon request. The item \The seller is \This item can be shipped to the following countries: america, europe, asia, australia.