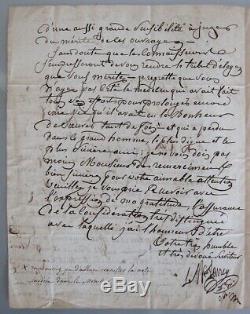 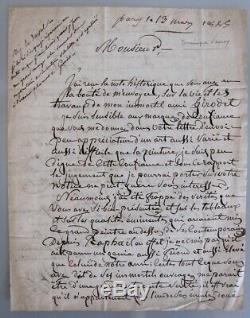 Larrey (Dominique-Jean), autograph letter signed in stone-alexander Coupin, paris March 13, 1825 2 pages in-4; address on the back of the second white layer. Larrey posthumous celebration of friendship to his friend the painter Girodet. Exciting and moving autograph letter dominique larrey about his close friend Anne-Louis Girodet, one of the greatest painters French preromantics.

Pierre-Alexandre Coupin published in 1825 a historical note on the life and works of Girodet, which appeared in 1829 in the works posthumous Girodet-Trioson he did seem to paris in renouard but the shot-to-shares were published soon 1825 being Girodet died on December 12th 1824. He sent a copy to larrey, as evidenced by this letter.

\Larrey and Girodet were close friends since the very end of the 1790 century. Indeed, in 1796, élisabeth larrey, surgeon's wife, learned drawing from Girodet. From this meeting was born a long friendship between the larrey cutting and painter. It struck the truth that you so well presented and on the tables and the eminent qualities that had made the great painter above his contemporaries.

Since Raphael in fact I do not think he seemed a kind as fruitful and as high as that of our friend. Certainly everything you said of his immortal works seems to me a great and exact truth, it is true that only belongs to one of his followers also gifted with great sensitivity to judge the merit of these works. I regret that you did not mention the doctor who made every effort to prolong a life he had been fortunate to save so many times - and who lost in the great man most worthy and most sincere friends.

\Girodet died following a violent urinary retention, despite the painful and dangerous operation had achieved its friend larrey few days earlier. Beautiful long letter posthumous friendship of the greatest surgeon of the empire and rare letter written about art by a famous surgeon. The item \The seller is \This item can be shipped to the following countries: France, America, Asia, Australia.