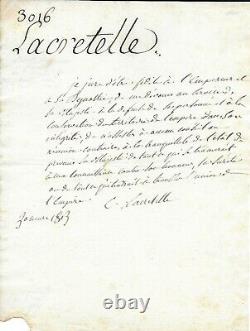 Charles de Lacretelle (1766 1855), journalist and historian and member of the French academy. 1/2p in-4 degrees, small angular gap left by the wax of the seal. Oath to the timer: \"3016 laretelle. I swear to be faithful to the occupier and his dynasty, to devote myself to the service of his majesty, to the defence of his person and to the preservation of the territory of the empire in its entirety, to nassister to any advice or meeting contrary to the tranquillity of the state, to warn his majesty of all that would be framed to my knowledge against his honour, his surety or anything that would disturb the one.\" Charles de Lacretelle was elected a member of the French academy in 1811. From 1812 he was a full professor of history at the Sorbonne. He is considered one of the pioneers of the historical study of the French Revolution. The item \"lacretelle autograph letter signed napoleon 1st 1st empire\" is on sale since Thursday, September 24, 2020. It is in the category \"books, comics, old books, collectibles\". The seller is \"cyril2472\" and is located in Lyon, Rhone-Alps. This item can be delivered anywhere in the world.