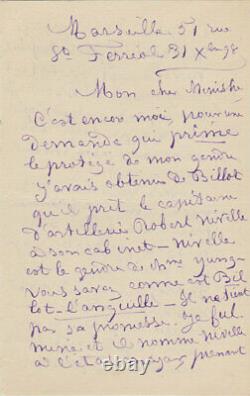 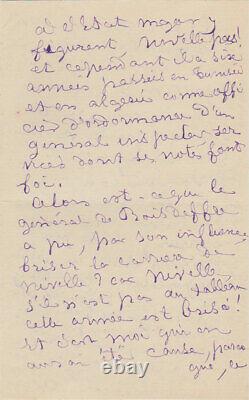 I learn that younger captains of rank than he belongs to the state major are on it, not level!] So did the wooddeffre general, by his influence, break the level career?

For even if he is not on the board, this army is broken! At the beginning of the First World War, Nivelle would be promoted Brigadier General at the same time as Philippe Pétain. Two years later, he was appointed to the command of the Second Army. His name was attached to the tragic nivel offensive conducted between April and June 1917. As a result of this failure, the losses are estimated at nearly 200,000 men on the French side.

Marseille 51 rue st ferréal 31 x. It's me again, for a request that takes precedence over my son-in-law's protégé.

I had obtained from logs that he took the artillery captain robert nivelle from his cabinet - nivelle is the son-in-law of mme yung - you know how bigot - the eel - he does not keep his promise. I fulminate and he appoints nivelle to the staff, taking the place of a wooddeffre protégé. In addition, she is a Protestant.

General de boisdefre told him that he would not go far into his career at the time of his entry. Nivelle wouldn't be my friend, his wife almost a daughter, if he wasn't patriotic to the moels. I thought he'd be on the promotion board.

And yet he spent six years in tunisia and algeria as an order officer of a general inspector service whose notes are authentic. So did the wooddeffre general, by his influence, break the level career? And I was the one who would have caused it, because, the brave boy, who did nothing, was betted by my influence. What would I have done to him? I beg you, don't give me that remorse. Yung, a handsome father-in-law being a solid republican - mme yung has one of the most patriotic paris salons, she is allied with the main families of alsace - make her son-in-law not broken. All you have to do is look at the grade notes to see the value of this officer.

His living room on 23, boulevard fishière, then, from 18874, on 190, boulevard males weeds, of which leon gambetta is the great man, is an active home of opposition to napoleon iii and becomes one of the most prominent republican circles. Charles de Freycinet is a French statesman and engineer.