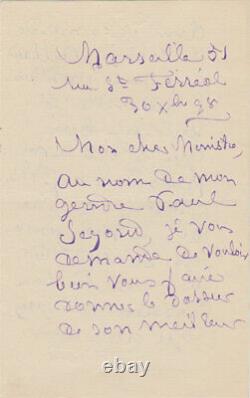 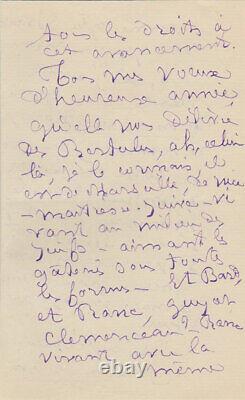 Signed autograph letter to charles de freycinet. Signed autograph letter, marseille, December 30, 1898, 4 pages, to charles de freycinet. On behalf of his son-in-law, the surgeon paul segond, the activist asks the minister for a promotion for his best friend, the captain of aillaud artillery. It ends with happy year vows and anti-Semitic remarks in this year 1898 when the dreyfus case is at its peak (publication of I accuse of zola, the trial of the latter, the death of Colonel Henry).

; juliette adam and charles de freycinet being both ardent antidreyfusards. Marseille 51 rue st ferréal 30 xbre 98. On behalf of my son-in-law paul segond, I ask you to have the file of his best friend and college comrade, aild artillery captain in luneville given to you. He would like the so-called friend to pass by squadron chief and he would say to himself - my son-in-law - that if you look at his file you will see that aillaud has every right to this advancement. All my happy year vows, that she deliver us from the bertula?

, ah, this one, I know it is of marseille, of nice - Jewish mistress living in the midst of the Jews - loving treats in all forms - and bastard and ranc, guyat, leniency? Ranc living with the same woman as strauss and a husband - ah, if I was thirty, what a mask I would see - I know so much about the corrupt and the French juxtaposed to france for so few generations. Thank you for the young lad engaged today.

English and Russian translations available on request. Third Republic at peace (france). Juliette lambert, wife adam listens, is a French writer, polemist, feminist and Republican. His living room on 23, boulevard fishière, then, from 18874, on 190, boulevard males weeds, of which leon gambetta is the great man, is an active home of opposition to napoleon iii and becomes one of the most prominent republican circles. Charles de Freycinet is a French statesman and engineer.

Our letters are accompanied by a descriptive sheet including a transcript. The invoices and cards we issue are instead of a guarantee certificate.