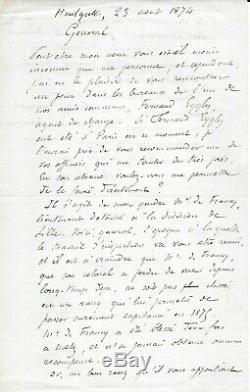 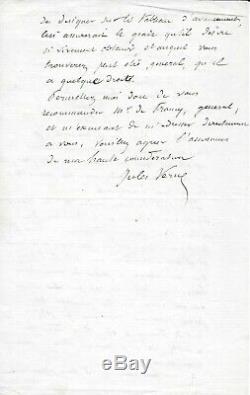 With tact and diplomacy jules verne recommends his son-in-law for the rank of captain whom he covets: \our mutual friends, fernand eggly, stockbroker. If Fernand Eggly had been to Paris at this moment, I would have asked you to recommend one of your officers who touches me very closely. In his absence do you want to allow me to do it directly? He is my son-in-law of Francy, lieutenant detached to the division of Lille. Here is the general period at which the inspection work is going to be handed to you, and it is to be feared that Mr. De Francy, whom his colonel has lost sight of for a long time, should not be classified in a rank which will enable him to pass surely. Mr de Francy was wounded twice at Metz, and never got any reward. Now, a good rank which it is your duty to distinguish on the advancement table, would assure him the rank which he so earnestly desires, and to which you may find, general, that he has some right. Allow me, therefore, to recommend to you Monsieur de Francy, General, and excuse me for expressing myself directly to you. \The item \The seller is \This item can be delivered anywhere in the world.