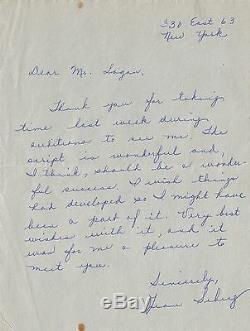 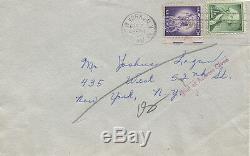 The autograph bookshop of the centuries has specialized for many years in the sale of autograph letters and manuscripts. Manuscripts of those who made the glory of the arts, literature, our history and science during the past centuries. Signed autograph letter to the director joshua logan.

A page in-4 ° on blue paper. Rare American lactrice letter coveting a role in the cinema. \The script is wonderful and, i think, should be a wonderful success. I wish things had been developed a part of it. Very best wishes with it, and it was for me a pleasure to meet you. Logan, thank you for taking the time to see me during the auditions. The script is wonderful and I think it will be a great success. I hope events will make sure I have a place in this one. With my best thoughts; it was a pleasure to meet you. Jean seberg was auditioned - unsuccessfully - for the film joshua logan, tall story (the head upside down, in French version) which came out in 1960. She had just shot in the film dotto preminger, hello sadness, adaptation of the eponymous novel of françoise sagan. A year later, in December 1959, at the French Consulate in Los Angeles, Jean Seberg meets Roman Gary. Lightning strike of a couple become mythical, dawn of their loves that will end tragically twenty years later. The item \The seller is \This item can be delivered anywhere in the world.