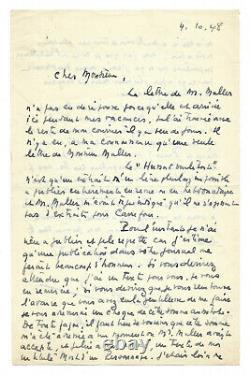 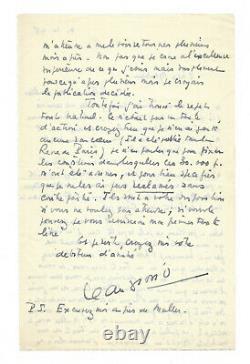 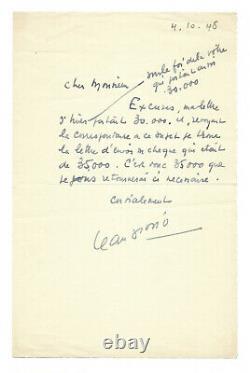 Autograph letter signed \"jean giono\" to the editor of the magazine crossroads [manosque], October 4, 1948 2 pages in-8. Long letter from giono about the hussar on the roof and death of a character. Muller didn't get an answer because what happened here during my vacation. I found it with the rest of my mail a few days ago. There was, to my knowledge, only one letter from Mr. The \"Hussar on the Roof\" is only an excerpt from a longer book, impossible to publish fully in review or weekly and m. Muller had already indicated that he did not have to use intersections. For the time I have nothing to publish and I regret it because I estimate that a publication in your newspaper would make me very honored. If you would like to wait until I have a text for you, I thank you; If you wish me to reimburse you for the hope that you were kind enough to send me I will send you a check of this sum immediately.

In any case, it must be remembered that this sum was addressed to me at a time when mr muller had accepted, and I had addressed him, a text of me entitled death of a character. I was far from expecting to see him return several months later.

Not that I believe in the superior excellence of what I write but simply because after several months I thought the publication was decided. However I found the rejection very natural. This was not a text of action and believe well that jen kept no rancour (it was published in the magazine of bets) I speak only to set the conditions in which the 30,000f mount was addressed, and to specify that I did not claim them without consideration. They are available to you if you don't want to wait; If you can, I will send you my first free text. And I remain, believe me, your debtor of mercy. Jean giono ps: excuse me to muller. A second autograph letter signed with jeans giono, 1 page in-8, also from October 4, 1948, relating to an erratum concerning the 30,000f addressed to him. The pre-war period was a complicated time for giono jeans. He was accused of cooperation by the Manosque Release Committee in September 44 and 15 months in prison. Grasset, also accused of collaboration, will have his house in receivership upon release. The relationship between giono and grasset then became execrable. Henri Muller, who had been general secretary of Grasset until 1944, was in regular contact with Giono and was edited by both grasset and gallimard.

In 1948, he ran the crossroads literary pages. The recipient of these letters and undoubtedly the editor-in-chief of the weekly in question.

Carrefour was a magazine created at the liberation and Gaullist current, which would later veer to the extreme right. The item \"jean giono / autograph letter signed / the hussar on the roof / oil edition\" is on sale since Wednesday, October 28, 2020. It is in the category \"collections-letters, old papers-autographs'other\". The seller is \"laurent-autographes\" and is located in versailles. This item can be delivered anywhere in the world.