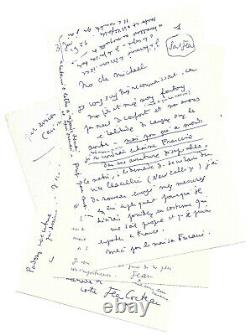 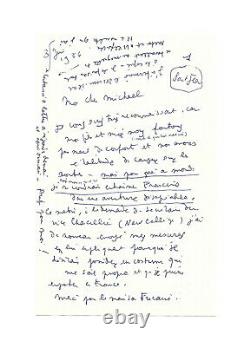 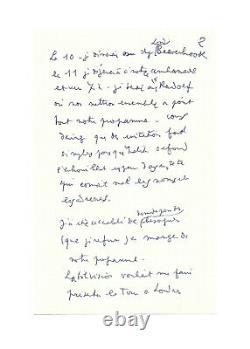 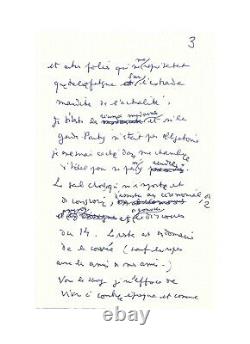 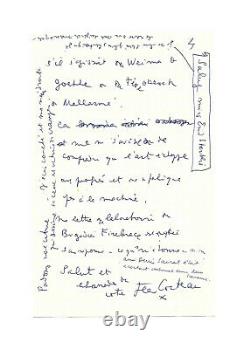 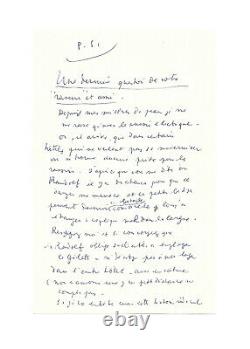 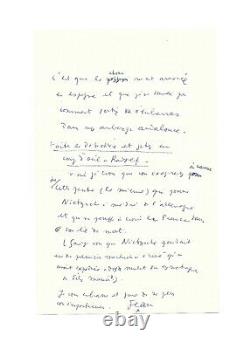 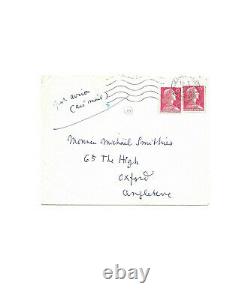 Autograph letter signed twice Jean cocteau and Jean à michaël smithies saint-jean-cap-ferrat, 3 June 1956, 6 pages in-8 with autograph envelope. Long and beautiful letter of Jean Cocteau on his next reception as Doctor Honoris Causa at Doxford University. I am very grateful to you, but for nothing in the world I would not train francine [weisweiller] in an unpleasant adventure. In the morning, at the request of the secretary of the vice chancellor (new college) I again sent my measurements explaining why I wanted to wear a suit that was clean to me and that I could take it in france.

The 10-I'll have dinner at Lord Beaverbrook's, the 11th I'll have lunch at our embassy, and around 7 am I'll be at the radolf where we'll work out our entire program together. I was overwhelmed with remorse for work (which I refuse) on the margins of our program. The television wanted me to introduce the tower of London and other madness that only represents fatigue on the cursed trades of the news. I hate social gatherings and if the garden party wasn't mandatory I would have hid in my hotel room so I wouldn't surrender.

The only thing that matters is to see you, to attend the 12th ceremonial, and to deliver the 14th speech. The rest is in the field of chores except meals with friends of my friends. You know that I'm trying to live against this age and as if it were the goethe weimar or the mallarmé ten oclock.

Because no one is savvy to understand that art escapes progress and is not made by machine. My letter to the brigadier firebace laboratory remained unanswered.

What amazes my friend Denis knew was in contact with their work. Hi and kisses of your cocteau jeans.

Ps: One last question of your "shaving" and friend since my skin miseries I only shave with the electric shaver. Sometimes, however, in some hotels that do not want to upgrade, there is no razor catch. According to what I am told about randolf [sic macdonald randolph hotel] there are chances that this danger threatens me and small nonsense can become a considerable obstacle when a foreigner is misinterpreted in the language. Tell me and if you see that the randolf forces its customers to use the vest do not hesitate to stay in another hotel with a car (we have one) the small distances do not count. If I bother you with this ridiculous story, it's because the thing happened to me in Spain and I didn't know how to get out of the embarrassment in an Andalusian inn.

You do the detective and throw a dil to randolf. But I think you're exaggerating because of this thought (mine) that pushes nietzsche to disdain on lallemagne and pushes me to believe the france in her deathbed. (Do you know that nietzsche owned one of the first typewriters that had been exported on the back of mules on the mountains of Sils maria2) I kiss you and swear not to bother you any more. On June 12, 1956, when Jean Cocteau was promoted to the rank of Doctor of Letters Honoris causa by Doxford University, he gave the speech on the 14th, which focused largely on poetry.

The item "jean cocteau / letter autograph signed twice / nietzsche / mallarmé / oxford" has been on sale since Monday, July 12, 2021. It is in the category "collections\letters, old papers\autographs\others". The seller is "laurent-autographs" and is located at/in versailles.