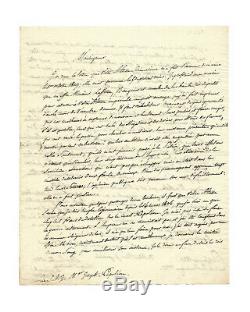 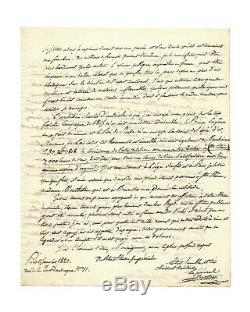 Autograph letter signed General berton to Joseph Bonaparte Paris, January 11, 1820, 2 pages folio traces of folds, tiny brown spots on the lower margin. Long and remarkable letter of a flamboyant Bonapartism, written during lexil of emperor to Saint-Helene. \My lord, I have received the letter your Serene Highness made me mécrire honor of October 1, 1819, she reached the mest 5 of this month. I take this opportunity dune moffre Mr. [Jacques] laffitte banker and member of the Chamber of Deputies to contact your Imperial Highness a little work I have done in print last December. We must rehabilitate many people terrified by our misfortunes to print again and highly thoughts and blush, if he is possible, those who betrayed the obligations and duties for favors, who denied the past to try to improve their present existence, quont they proved by such baseness, their ambition navait been generated by any noble sentiment, they have never thought about their country, their affections nétaient that simulated their hypocrisy complacency, their obedience to Serfdom, comments who have not been able to escape but we were in the need to use two for lack of better. Many characters have realized too late their nonsense. Lopinion public sest pronounced definitively on them, she made justice. To hear some passages from my pamphlet, Your Highness must know that I am single Legionnaire since March 14, 1806, I havent had five hundred francs endowments on Mount Napoleon. I have not stopped making war actively. Lempereur did not know me and I have been long in remote armed him, he did not do anything for me i just acquired by my sword.

Well, especially now that he is unhappy, I give half my blood to improve his life, I would say in front of all the kings and threw if allowed to express to them my thoughts and perhaps they would consider my frankness. Millions of French think alike, I manifest more boldly than others. Public Lopinion, today in France can be compared to a huge balloon that inflates every day more and more dair power under the leadership of the national mind, air surrounding this great machine is saturated with flammable material; what would experience some friction would soon fear a large fire that should become master to stop its ravages. Larchiduc Charles of Austria to whom I sent my specific about too fatal campaign of 1815 [Belgium campaign notably marked by the defeat of Waterloo on June 18 and to which the General took part berton] I wrote an admirable letter; Prince eugene has done the same and the King of Sweden sent me the cross of gold sword. [Emmanuel] las boxes, this man so estimable I also wrote manheim, 30 Xbre 1818 the coincidence of your relationship with another dictation (ste-Elène) 3,000 leagues you shall be for you a cause great satisfaction as well quune Dorgueil species.

He is now in Cork, his son is in Paris, I see him sometimes; he assured me that two of my particular had reached Elène ste. [albine] montholon who is in Brussels gave certainty. I often see poor Spanish here that retain the affection of your Imperial Highness; they would hardly be happier in their country all the published effects were canceled there, several had entered France with vales and Nont able to capitalize: jen have, myself, for four hundred thousand reals which are reduced to nothing and this is all that javais reported Despagne.

Our government could wind up with it sil had paid with these values ​​i honor BE Monseigneur with the deepest respect Your Imperial Highness's most humble and obedient servant. Jean-Baptist berton, General dempire, here refers to his pamphlet, police on considerations comment on the rumors which spread, in which he denounced those heir meanness? It is repeatedly noted for his bravery during the Napoleonic campaigns, especially with the great army in 1805 campaigns in 1807, those of 1808 to 1813 in Spain, the one of 1814 in the army of the south, and in 1815 the country waterloo which he is referring. The second restaurant definitely puts the retired but still imbued Bonapartism of a more dedicated as evidenced by this letter.

Head in the Saumur conspiracy aimed at the assassination of King louis xviii, he is betrayed by relatives and executed October 5, 1822. The death of his brother Napoleon 1 and his nephew Napoleon Bonaparte ii joseph made the first heir to the imperial throne. Provenance: Charavay catalog, Paris (1950). The item \The seller is \This article can be shipped worldwide.