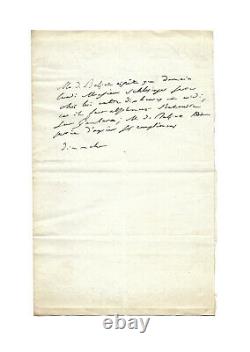 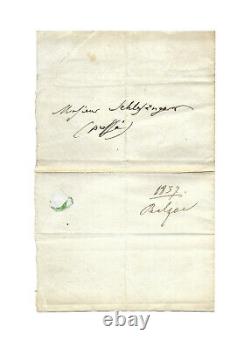 Balzac evokes his masterpiece Gambara, from philosophical studies of human comedy. De balzac hopes that tomorrow Monday Mr schlesinger will be at his home between the hours and noon, because it is absolutely necessary to hear about gambara, m. De balzac asks him to accept his compliments. Gambara is a new dhonoré de balzac, published in 1837 in the magazine and betting gazette at the request of. Maurice schlesinger, then resumed in human comedy where she was part of philosophical studies.

In this work we find the formidable artistic intuition of the author of human comedy. While, in the unknown masterpiece, balzac explored the genius of the painter and searched the soul of a sculptor in sarrasine, he addresses in gambara musical art through the character of an instrument factor become composer of crazy music. This news, which remained ununderstood at the time of its publication, has since been recognized as a large-scale work.

The item "honored by balzac / autograph letter signed / gambara / human comedy 1837" has been on sale since Monday, June 21, 2021. It is in the category "collections\letters, old papers\autographs\others". The seller is "laurent-autographs" and is located at/in versailles. This item can be delivered anywhere in the world.