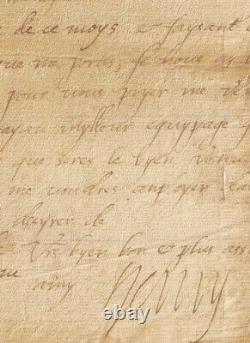 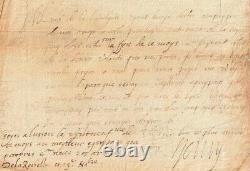 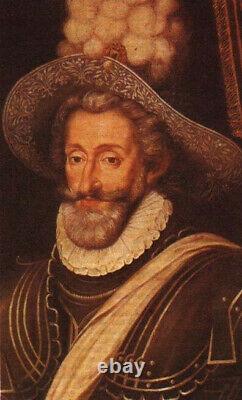 Henry iv meets catherine of medicis to conclude peace. Signed autograph letter, la rochelle, 19 November [1586], addressed to \"Mr. Of lardyere\" (lieutenant of the king in high-poitou). 1 page in-8, oblong, starved ink. Interesting letter in which Henri, king of Navarre and leader of the Protestants, evokes his next diplomatic interview with the queen of France catherine de medicis.

De lardyere, needing to be accompanied by my friends at this next interview with the Queen. Catherine de Medici to be held at the end of this month. A state of goodwill that you have for me, I have kindly written this note to you to ask you to come and take part with the best crew possible, assuring you that you will be welcome...

Be reading the 29th of this month with your best crew and with your weapons. Your good and assured friend.

In 1586, the war raged between Henri iii, King of France, allied to henry of will against henri de Navarre, future henri iv. This is the famous \"War of the Three Henri.\" Catherine de medicis tries the path of negotiations.

She arranges an interview with Henri de Navarre, who is also her stepson (he married Margot, daughter of catherine de medicis). The meeting is scheduled for early December.

This deadline is carefully prepared by the Queen in a tense context. On November 28, she wrote to one of her faithful soldiers: \"We have granted, the king of Navarre and I, that we will gather in the six or seventh of next month to look at the means of a good and endible peace and general rest of the kingdom.\" Negotiations are well underway and each side is releasing prisoners.

Henri de Navarre agrees to a truce from the rock, Huguenot stronghold. Despite this, the Protestants continued the fight, taking the town of Rocroi in particular.

Catherine, however, does not neglect any details to welcome the future king of France. She wrote on 10 December: \"We agree that the place of our interview will be in a castle called Saint-brice [5km cognac]. I will have my apartment on one side and said Sieur de Navarre his, and there is a pretty nice room to assemble us there.

\" The interview is set for 13. Henry comes \"with about four hundred horses from his suite and those lords who are with him.\" Catherine recounts in her letters the meeting, the reciprocal reproaches, the game of negotiations, the hesitations of Henri, and his lack of decision, objecting that he must tell his English and German allies before making any decision.

It was not until 1588 that reunification took place, with the conversion of the navarre henry to Catholicism and its official designation as heir to the throne. Certificate of authenticity on request. The item \"henri iv king autograph letter signee catherine de medicis\" has been on sale since Saturday, November 21, 2020. It is in the category \"collections-letters, old papers-autographs-historical personalities\".

The seller is \"chelli-autographes\" and is located in bets. This item can be delivered anywhere in the world.