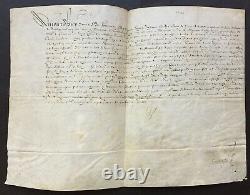 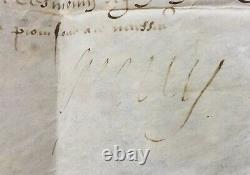 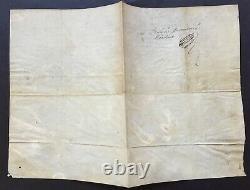 Henri iv king of france document / letter signed for his sur and the connétable de france 1598. He brought together the dignity of king of france and navarre and was the first French king of the Capetian house of bourbon. Order signed by King Henry iv ("Henry"), bets, 31 January 1598, 1 page in 4 oblong on vellum, countersigned by champagne gaspard, Count of the suze, advisor to the king in his councils of state and private, governor for his majesty of the city and castle of belfort and adjacent countries in alsace.

Order of the king for the benefit of bourbon catherine, his sur, henri ier de montmorency, the connétable de france, and charles de lorraine, duke de mayenne. "Today the last day of January 1598 the royant estant a paris granted to her on the sum of 17,500 escus, to the connestable 25,000 escus, to the Duke of Mayenne aussy 25,000 escus, to the gentlemen of palace and Saucy each 10,000 escus on the moneys that will come from the sale of the offices darchers, prevosts, and short criminal lieutenants of robb that his majesty erected by his esdict of the present month of January. In tesmoing, his majesty signed the present patent with his hand and ordered his adviser and secretary to join in contrasigning and dispatching all provisions to this necessary. On dhenri iv, he gave him in 1582 the general tenancy in the bearn, where Catherin would exercise a kind of regency during his absences. He was a france connetable and governor of the Languedoc for fifty-one years.

Henri's younger brother at will. A war captain during the religious wars, he participated in several military campaigns during the reign of Henri iii. Governor of Burgundy, he held the honorary office of Grand Chamberlain at the Court of France. After the assassination of his brothers in 1588, he took the lead in the league but, following several defeats (archs, drunkenness, French fountain), he made his submission to King Henry iv in 1595. Complete transcript attached, good condition sent by registered mail.

The item "henri iv roi de france document / letter signed on connétable et voit 1598" is on sale since Saturday 3 July 2021. It is in the category "collections\letters, old papers\autographs\historical persons".