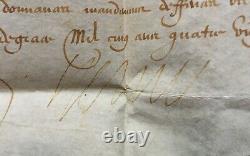 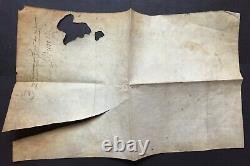 Henri iv King of France document / letter signed parliament of bets 1594. Document signed \"henry,\" laon, June 30, 1594, countersigned by his secretary of state martin ruzé, vellum oblong, for the advisor, treasurer of his savings, François hotman. Document by which the king grants financial rights to one of the presidents of the betting parliament.

\"Henri by the grace of god roy de France and navarre aconseiller and tresorier of nostre espargne mr Francois hotman salute. We want you to make sure that deniers of ours you pay baillez and deliver cash to our loved one and feal advise in our council of two and president in nos our court of parliament sr forgets the sum of [for] the good and a pleasant services that he has made us and continues each day and gives him as much more means to persevere we have faicted him and donate by these present signs of our hand so that on icelles is nothing desduictes for him the fifth denier intended for the order of the st spirit from which we have dispensed and dispensing by these present reports which to the releases of said sr forget on this sufficiently we voull the said sum of millen escus soil is pass and allocates in the expense of your accounts and folded the recept by our loved ones and feaux the people of our accounts at which we also manage to do it without difficulty because such is our pleasure notwithstanding what orders orders deffences given to laon camp on the last day of juing lan of grace mille five cens ninety-four and to ourre reigns the fiftieth. He was a member of the loyalist minority in the betting parliament and refused to serve the league and was rewarded by henri iv. He was e stone brother forget, superintendent of finance, secretary of state who signed and is reputed to be an editor of the edict of nantes.

The item \"henri iv king of France document / letter signed parliament of bets 1594\" is on sale since Saturday, February 27, 2021. It is in the category \"collections-letters, old papers-autographs-historical personalities\". The seller is \"epistole\" and is located in bets. This item can be delivered anywhere in the world.