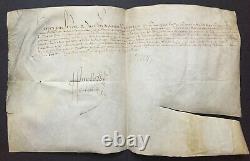 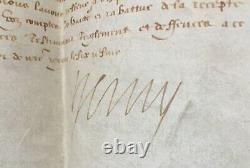 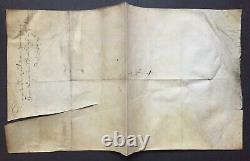 Document by which the king grants financial rights to the sieur de la crouge being with Monsieur de ladiguières as a reward for the services rendered. François de bonne de Lesdiguières was a French soldier, marshal of France, and he was also the last constable of France between 1622 and 1626.

\"Henry by the grace of god roy de France and Navarre a nostre loves and feal advise in our advice of nostre espargne mr Francois hotman salute. We want and order you that deniers of our espargne of the present year you pay and deliver cash or assignment by yourtre order bearing release to the simmer of the crouge gentleman isant withq the sieur of the ediguieres the sum of six cens escus soil from which we luy have faict and give both in consideration of the services which he has made us and continues each day and to give himself a way to continue to maintain there without that sum ready or withheld to thelcune [sum] of the fiftieth deniers for the order of the healthy spirit of which we have received and dispensed by our present. Reporting which releases of said sieur of the crouge want the said sum passed and allocated in the expense of our accounts and folded the recept by our likes and feaux the people of our accounts, which we also order to do without difficulty notwithstanding what orders restrictions regulations and regulations to this contrary because such is our pleasure.

Given the tenth day of September lan of grace mille five cens ninety-four and were the sixth. The item \"henri iv king of France document / letter signed 1594\" is on sale since Saturday, February 13, 2021. It is in the category \"collections-letters, old papers-autographs-historical personalities\". The seller is \"judi75000\" and is located in bets. This item can be shipped to the following country: European Union.