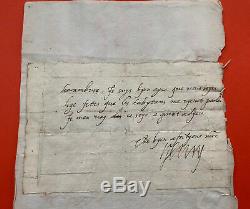 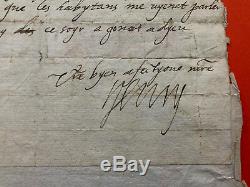 Very rare autograph letter entirely. \Fetes that habytans vyenet me speak. I men vay this soyr to Gonor. \He remained faithfully attached to his service as an officer, and was all fighting, showing dune uncommon bravery: he participated in the capture of Niort (December 1588) where he lost an eye and was wounded in Arques (September 1589) he fought at the siege of Rouen where he saved the king's life and the dagrippa Daubigné etc. Henri iV made him governor of Vendôme then daiguesmortes.

The Gonnord castle on lactuelle vallanjou town in Maine-et-Loire, belonged to the family cossé. The item \The seller is \This article can be shipped worldwide.