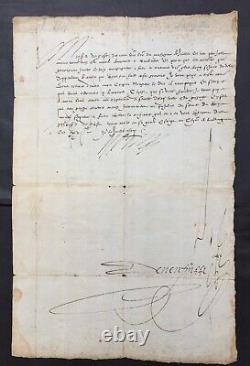 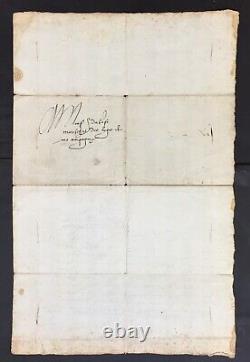 Henri iii king of France - signed letter - 3. War religion - Calvinist armed junction - 1568. As the last of the Welsh, he distinguished himself as leader of the Royal Army by winning the battles of Jarnac and mycontour under the reign of his brother charles ix. A friend of rads, the guast is " brave, brutal, cruel and terribly battler".

Very beloved of king charles ix and favorite of henri iii, he passed "for taking care of a lot of innocent blood to the holy barthelemy" and hated their sour marguerite of valois whom he called "the queen of the whores". Rare letter signed from 1568 of the young henri (he was then 17 years old) - with double mention of his brother charles ix - during the 3rd religious war when he was since November 1567 commander of the royal army and lieutenant general of the kingdom, on the junction of the Calvinist armies. As soon as it was signed in February 1568, Catholics protested against the peace of the long twin, which gave the Huguenots the stipulations of the edict. Gathered with their armies with the rock, coligny, condé and henri de navarre (futur henri iv) fear being exterminated. At laval, antelot and his Calvinist army of Bretons, Manceaux and Angelvins, plans to descend in anjou and cross the Loire in brine to meet the Calvinists of the Poitou.

The duke of Montpensier, who was alert to his approach, ran to brine to defend the passage of the loire. In order to avoid the joining, Henri, commander of the royal army and lieutenant general of the kingdom, orders here his favorite, sent by charles ix to brine, to preserve the "security of the city" and its passage for the benefit of his brother the king ("so that he may not suffer any inconvenience to the prejudice of the service of the king mondit seigneur and brother"). At the beginning of September, the Royalist troops, antelope and the rest of his army managed to cross the Loire after the discovery by chance of a ford and reunite with the rest of the Calvinist army at la rochelle. The victory will return to henri during the battle of Jarnac in March 1569. "Mons[eigneu]r de gast jay receu v[ot]re l[et]re du nineiesme de juillet and veu par icelle as you have been mandated to remain at salmur (saumur).

And by the fact that the opportunities that could incite the King Monsignor and Brother to continue v[o]re longer stay of the dependent ceulx that have made you somonest, I take you to this cause to withdraw you from my cousin, Duke of Montpensier. And according to what he will order you to untie, something that if you fail I take you to have open your eyes to the preservation and serenity of the said city and the passage so that he may not suffer any inconvenience to the service of the king mondit lord and brother according to the trust that he has in you. Praying God, my lord of gast, have you in his custody [. This item is in the category "collections\letters, old papers\autographs\historical persons".

The seller is "*epistole*" and is located in this country: fr. This item can be shipped to the following country: whole world.