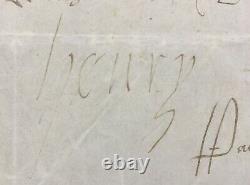 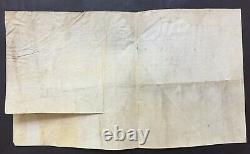 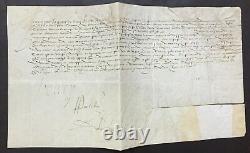 Henry ii king of france document / signed letter King's house 1549. A perfectly representative king of the French renaissance, henri ii continues his father's political and artistic work. He continues the wars of italia, focusing his attention on the empire of quacks which he manages to put in check. His reign also marked the rise of Protestantism, which he repressed more rigorously than his father.

Given the importance of membership in the reform, henri ii failed to resolve the religious issue, which led to religious wars after his death. Document / signed letter "henry", countersigned by claude de laubespine. Montargis, February 18, 1549; 1 page in folio oblong on vellum. Order of the king to pay 30 ecus to robert leze, valet of the king's house (furnace) for the good services which he personally rendered to him.

"Henry by the grace of god King of France. To our loved one and feal advisor tresorier and receiver general of noz extraordinary finances and casual parts mr jehan the watch hi and dilect.

We want and ask you that money that you have received or will receive from the sale and composition of the office of royal sergeant [at the service of the prevot, role of justice and police] in the prevost of Montigny the roy vaccant by the trespas of fiery claude jully you pay bail and deliver counting to our dear and beloved robert lezé valet of our furriere the sum of thirty escuz dor and ten sous in favor of the good and pleasant services that he has us by cy before us made each day in his summer we have ouded these cheerful gifts and wellfait that he has by cy before us and will still be able to cy x x and without any diminution diceulx, made and donate by these presents signed by our hand. In reporting which and receipts of this robert leze we want said sum to be passed and allocated in the despatch of your accounts and folded from the receipt by loved and fair noz the people of our accounts to which we also ask to do so without difficulty. For this is our pleasure.

Given to Montargis on the 18th day of February lan de grace 1549 and noustre regone the third. The item "henri ii king of france document / letter signed house of king 1549" has been on sale since Saturday, October 23, 2021.