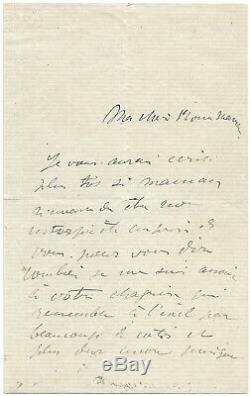 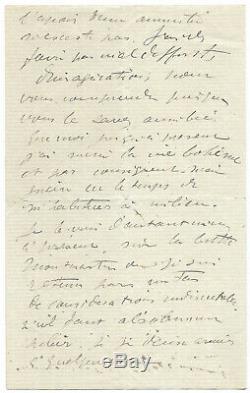 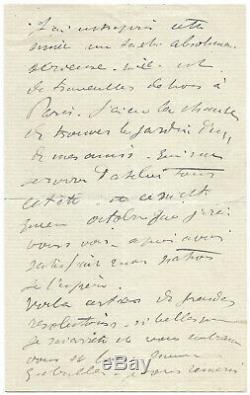 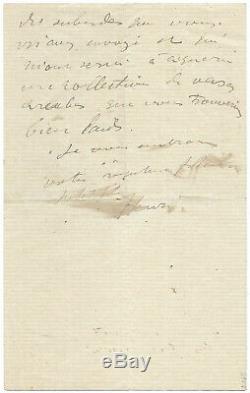 Autograph letter signed \December 28, 1886 4 pages in-12 in half morocco modern blue shirt. Traces of folds due to shipment original, tiny and unobtrusive repair scotch, light discharge ink at the signing. Important letter, largely unprecedented, in which the artist evokes from his Montmartre bohemian life and announces new projects to paint outdoors, under the influence of the Impressionist movement. I would have written you sooner if the mom navait be my interpreter understood you to say how much I associated with your grief resembling lexil by many sides and even the hope as well nexiste not amnesty. Jai had to make a lot of effort of imagination to understand you because you know as well as I, until now i lived the life. [De] nai Bohemia and therefore no time to mhabituer to [ce] medium.

I see better now dautant on the Montmartre hill where I held a lot of compelling considerations that it is essential to undergo if I want to get somewhere. Jai undertook this year an absolutely serious task of working out in paris. I was lucky to find a garden of my friends [forest father] that will serve me datelier all summer and this is quen October Jirai that you see after meeting my boss [Fernand Cormon] I lespère. This is certainly great resolutions so beautiful I marrête you and kiss you and gabrielle good mom. Thank you for subsidies mavez you sent and which I used to buy a collection of Arab vases that you would find very ugly.

I will kiss your little godson son. Henri de Toulouse-Lautrec was a major artist of the Parisian art world of the late nineteenth century and known from 1885 to 1895 the soul of Montmartre, where he resides during the decade. Considered as one of the key figures of the post-impressionist current, its short but no less intense career sest comprised of multiple influences whose starting point is limpressionnisme; this is indeed aware of the year 1885 that he met Vincent Van Gogh or Edgard Degas whom he greatly admired. So that he is still a student in the workshop of Fernand Cormon and seeking himself in his art, he decided to make a series of outdoor portraits in the forest father's garden (met by lintermédiaire of Dihau family), based in Montmartre. The famous series of portraits that he realized there jusquen 1889 will be a critical step in the artistic career of the painter. There apply in his painting technique prospects approaching those of Degas with underwater views. The style of Toulouse-Lautrec contains other elements as a dominant Impressionist clarity to the feeling of space; also, his touch is free and fragmented. This letter ad really the genesis of this outdoor project and the start of fame for Toulouse-Lautrec. Among the famous portraits in the garden of forest father, note the woman with gloves (dorsay museum) or the redhead (nahmad collection).

The forest father, photographer, had a house with a large garden on the Boulevard de Clichy, behind the cemetery of Montmartre, at the intersection of forest street (hence its name) and street caulaincourt. It will remain famous for its giant piece cain fleeing with his family to the museum today dorsay. He is quoted quun nen small fault extract and incomplete, he mentioned erroneously that the letter is addressed to the paternal grandmother of the painter. The item \The seller is \This article can be shipped worldwide.