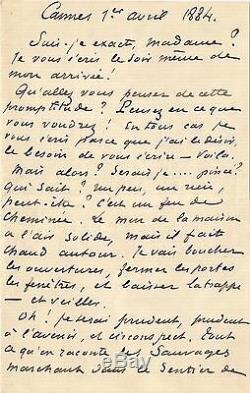 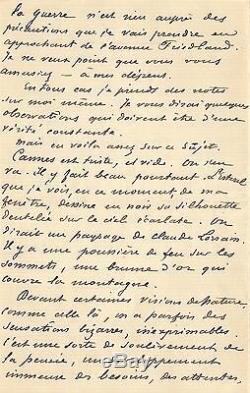 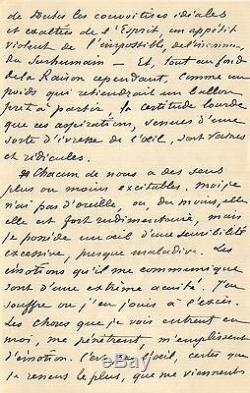 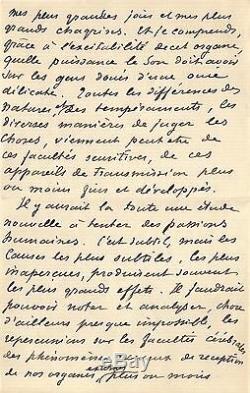 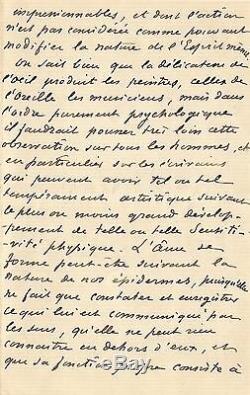 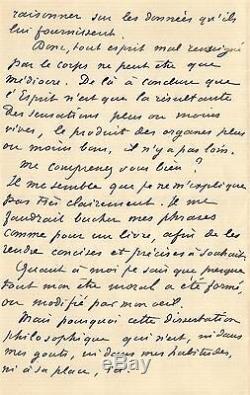 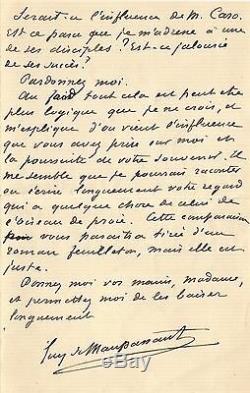 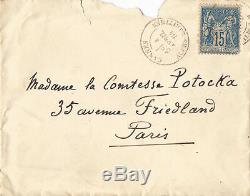 The bookstore autograph centuries has specialized for many years in the sale of autograph letters and manuscripts. Manuscripts of those who made the glory of the arts, literature, history and science in past centuries. Autograph letter signed to Countess Emanuela Potocka. \Long and remarkable letter maupassant that after mentioning his relations with the Countess and the dangers that it would have to be in love, describes the influence of the sensitivity about human nature and the development of the soul. I am writing on the evening of my arrival! Quallez you think this readiness? In any case I am writing because I have the desire, the need to write to you here. The wall of the house has air solid, but it's hot around. I'll block the openings, close doors windows, and down the hatch and see. I will be careful, cautious and circumspect in the future. Everything tells quon wild walking in the path of war nest anything with caution that I will take in approaching friedland Avenue. I do not want you to have fun at my expense. Anyway, I take notes on my own. I'll tell you some observations that should be dune constant truth. But enough on this subject. Cannes is sad and empty. Lesterel I see right now from my window, draws its jagged black silhouette on the scarlet sky. It looks like a landscape of Claude Lorrain. There is a fire of dust on the peaks, a golden haze that covers the mountain.

In front of some kind of visions like this, we sometimes have odd sensations, inexpressible. This is a kind of uprising of thought, a huge development needs, expectations, and desires all the ideal of exalted mind, a strong appetite for the impossible, of the unknown, the superhuman. And the cold of reason, however, as a weight which would retain a balloon loan from the heavy certainty that these aspirations came dune so divresse lil, are vain and ridiculous.

Each of us senses more or less excitable. I havent doreille, or at least, it is very basic, but I have a dune he excessive sensitivity, almost sickly. The emotions that he communicates to me are dune extreme acuity.

Jen jen suffer or enjoy in the excess. The things I see come into me, penetrate me, memplissent demotion. This is lil certainly I feel most that come to me my greatest joys and greatest sorrows. And I understand, through lexcitabilité of this body, what power the sound must have talented people on dune delicate hearing.

All differences of natures and temperaments, different ways of judging things, maybe just the sensitive faculties, such transmission apparatus more or less fine and developed. There would be a new attempt to study human passions. This is subtle, but the more subtle causes, the most unnoticed, often produce the greatest effects. We should be able to notice and analyze dailleurs thing almost impossible, the impact on the brain power of nerve reception phenomena of our external bodies, more or less impressionable, which is not considered as the action that can change the nature of the mind itself. We know that lil delicacy product painters, those of ear musicians, but in the order purely psychological, it would push far this observation to all men, and especially about writers who may have a particular artistic temperament according to the greater or less development of a particular physical sensivitÃ.

Soul forms perhaps depending on the nature of our skins, puisquelle only see and record what is communicated to him through the senses, which can not know anything outside both, and its own function is to reason about the data they provide it. So every spirit misinformed by the body can be only mediocre. From there to conclude that nest mind that the resulting more or less lively sensations, the product of more or less good organs, there is no further. It seems to me that I do not mexplique very clearly. I would have woodshed my sentences like a book, to make them concise and precise as desired. As for me, I know almost all my moral being was formed or altered by my it. But why this philosophical essay that is neither in my tastes nor my habit, nor in its place here.

Would this influence of m. Is it because I madresse one of his disciples?

Is it jealousy of his success? I think I could tell or write your long look that is something that of the bird of prey.

This comparison will seem drawn you of a soap opera, but it is. Give me your hands, madame, and let me kiss length. The Countess, as well as many other women of the world, attended his lectures at the Sorbonne. The item \The seller is \This article can be shipped worldwide.