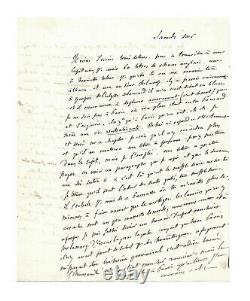 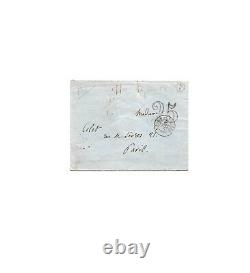 Autographed letter signed "Ton g." to louise colet [croisset] Saturday evening 26 June 1852. In-4, attached autograph envelope with postmarks and red wax seal traces of folds, small trace of rust on page 4, tiny missing at the top margin of the second sheet. Long and remarkable letter on betting life, musset alfred, poetry and prose, and on the laborious advancement of Madame Bovary. "I just wrote three letters, one in trouville, to a captain, to have 60 liters of English rum, one with henriette necklace so that she or I return your album and one to the sieur. There's, I think, a turnaround.

About the ponsard's ulysses he wrote me from a goal in white and he starts to complain bitterly, that's the word, that I'm not at a bet where my place was between ponsard and vacquery. It's just bets that we live, etc. I lead a neutralizing life. I answered him strictly and tightly on this chapter. I don't think he'll come back and show my letter to anyone.

I stood there in the subject, but I stuffed it. My letter has four pages; here is a paragraph which I copy and which will give you an idea of the tone: that is where the breath of life is, you tell me. I think he smells like spoiled teeth, your breath of life.

He exhales for me, from this parnasse where you invite me, more miasms to make vomit than dizziness. The laurels we get rid of are a little covered in shit, let's agree. And in this regard, I am angry to see a man of spirit bid on the marquise of escarbagnas, who believed that "outside bets, there was no salvation for honest people". This judgment seems to me to be a provincial one, that is, bounded. Humanity is everywhere, my dear sir, but the joke more bets than anywhere else, I agree, etc. Your long story of the musset visit made a strange impression. In short, he's an unfortunate boy. You don't live without religion. There's no one there, no compass, no goal. We float day by day, drawn by all the passions and vanities of the street. I find the origin of this decadence in the common mania that he had to take the feeling for poetry. The melodrama is good where margot cried. Which is a very pretty verse in itself, but of a convenient poetic. "Just suffer to sing," etc. These are the axioms of this school; it leads you to everything as moral and nothing as an artistic product. Musset was a charming young man and then an old man; but nothing planted, rassis, square, serene in his talent or person (as existence I hear). Vice is no more fruitful than virtue. We must not be either, vicious or virtuous, but above all that. What I found most foolish and even drunkenness does not excuse is the fury about the cross. It's lyrical stupidity in action, and then it's so much wanted and so little felt. I don't think he listened very much to melaenis.

Do you not see, then, that he was jealous of this stranger (bouilhet) whom you began to brag about after you rejected him? He took the first pretext to break the dogs there. It would have been stronger on your part to subscribe to his condition and then, on the evening of reading, to answer him with his maxims "that a woman must lie", and to tell him "my dear sir, go to others, I have played you".

If he wants you, he will read your poem; but he is a poor man to silence the confession that the little newspapers prevent him from keeping his word. His letter of apology completes everything, for he still promises nothing; it is not frank. I've been writing to you a few times and I don't think about talking to you about the melaenis article. Nefzer's gonna do the story, it'd be better. Let's try to find out.

If we don't, we'll fix yours a little bit and see him again. I don't like your corrections to royal residences (we'll see later) or your sonnet.

You'd deserve me to pull you (explain the subjunctive) your ears for your reintroduction, an expression of canonical law that you put me there! You sometimes use words that rage me. And then the middle of the sonnet isn't full.

All worms must be tangled in a sonnet, coming from one breath. Last Sunday, the bouilhet piece on pradier had 12 verses of facts. He had to remove the beginning that was bad. I hope he'll bring me the finished thing tomorrow.

Since this morning, I've had an occiput pinch and a heavy head like I'm wearing a lead quintal in it. I've written three pages of my entire week, and I'm not happy about it. What is atrocious about difficulty is the chaining of ideas and that they naturally derive from each other. You seem to me in an excellent vein; but meditate more.

You rely too much on inspiration and go too fast. What makes me so long is that I can only think of the style with the feather in my hand and I pat in a continuous mess that I clear as it grows. But for worms it's clearer, the shape is all wanted. The good prose must be as precise as the verse, and sound like it. I read in this moment a charming and very beautiful thing, namely the states of the moon, of gherac cyrano.

It's huge in fantasy and often in style. Can you tell me about the exact time of reading your price? I think I finished my first game at the end of next month. We'll go to Trouville for 15 days in August. If my betting trip was between those two times, it would make me feel better. Farewell, dear beloved woman, I kiss you on the heart. Do you know that your story of the musset visit is skullfully well written, perhaps without you knowing it; it grabs.

Flaubert began by disapprove of the credit that one gives to Parisian life, claiming his taste for isolation, he, who loves to give himself the ethos of a martyr of art dedicated to living away from the centralized tumult. Inciting colet to join him in the province, he wrote to him in his letter of August 14, 1853: "Love us in art! Perhaps here we can read the writer's perpetual quest for perfection. And perhaps we can anticipate the continuation of the letter, in which, on the one hand, he severely criticizes the poetry of his lover, of romantic invoice, and, on the other hand, evokes his own ardentness: "I wrote all my week three pages, and yet of which I am not delighted. We will return to that.

Muse and mistress, of course, colet is also his favorite epistolar correspondent. This connection, however, was not obvious at first glance: the charismatic poetess inspires what flaubert disapproves of: the self of the small literary milieu, with its torments and maneuvers. From 1849, the ruptures followed, until the last, in 1855. A double vengeance ensued: colet publicly mocked flaubert in him (1858), pointing to his "monstrous pride", while flaubert was trying to denigrate the opening of his former mistress, but his words did not come out of his private circle. This is not without consequences.

In fact, his literary success of the time, the popularity of the "small circle of coletians" was almost erased from posterity; it was only in 2014 that his novels – however praised by victor Hugo – were reissued for the first time. The qualification of "unfortunate boy" certainly refers to the famous confession of a child of the century (1836), a novel of autobiographical inspiration in which musset develops the "evil of the century", feeling of melancholy, of anxiety generated by the nostalgia of the times preceding the emergence of a materialistic society emptied of all spirituality. This is how flaubert's comments about musset readily accuse this auctorial staging of romantics. Nevertheless, we also find a certain exasperation on the part of flaubert, to see the eyes of his lover turn away: "Have I been jealous, me, in all this?

"settlement letter" (July 12, 1852). Three weeks earlier, colet recounted in his memento his encounter with musset: "He arrives at an hour, breathless, coughing, spitting, looking grey; I offer him a glass of sweet water, he asks for a glass of wine.

I tell him I have only very mediocre, he tells me that the wine he prefers is blue wine. He's swallowing a big glass of the wine I've got for henriette 12 minutes under the liter. Beyond literary differences and rivalry for the collet court, similar descriptions of the alcoholic aristocrat contribute to flaubert's repugnance of musset.

In fact, the novel he, whom we evoked, seems openly inspired by triangular love between the three writers: a beautiful novelist drawn between leonce, misanthropist novelist, and Alberta's fallen alcoholic poet. The extract of the above mentioned colet memento is taken as it is in the work. Let us remember, however, that flaubert, contrary to what the literary heritage tells us, does not categorically reject romanticism; he even signed one of his last letters before dying "Gustave, the last romantic ganache" (hennic léon letter, February 2, 1880), and he regretted that Madame Bovary became the archetypal opening of the so-called realistic novel - he has always challenged terms such as realism and naturalism. Opens the archetypal of realism, well because the introduction of the decorum and the desire to "make a book on nothing" "letter to praise colet" (16 January 1852) would find it difficult to find equal in romanticism, including the second wave - for example, the flagship novels of Hugo. When balzac, of whom flaubert told himself to the antipodes, wrote seven versions of Father Goriot (1834) in forty-two days - let us not misunderstand it, this does not mean that all the work of the genesis and evolution of the opening lasted only a month and a half!

-, flaubert, on the other hand, takes almost five years to write Madame bovary, labor that andré verse thus sums up in stupidity, art and life. By writing Madame Bovary (1991): "He writes two pages a day, two thirds of which he destroys the next day.) It is the sensation; experience the sensation, and slowly, manage to restore it.

We all know the anecdote of the draft of Madame Bovary's incipit longer than the novel itself. Indeed, the writer is convinced that there is only one and only good way to write things; we then understand the perpetual quest for "just style", a style that requires that "all sentences be different and, at the same time, words cannot be changed when they are in a sentence. According to yvan leclerc in flaubert. Indeed, this novel recounts adventures on the moon and the sun where dreaming and imagination come to overcome the lack of scientific knowledge. This seems to us far from the observational work that flaubert is doing to describe in a way that we can no longer realistically describe the society of his time.

Flaubert remains famous, among other things, for Madame Bovary (1857), a novel that presents psychological analyses carried out on the individual and the society, distinguishing itself from the romantic ideals of the first wave. The reception of the work then envisages a realistic aesthetic, which has marked or even changed literary history. 23836, file 349, the letter is stamped on 27 June 1852. Gérard-gailly the date to the wrong of June 19, 1852 bulletin du bibliophile, art. 325; it is of the same day as the letters with henriette necklace and maxim of the camp, dated by flaubert of 26 June. This item is in the category "collections\letters, old papers\autographs\others". The seller is "laurent-autographs" and is located in this country: fr.