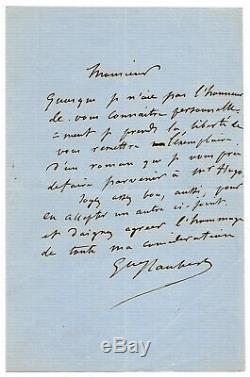 \D [croisset, April 1857] 1 page in-8 on laid blue bifeuillet. Gustave Flaubert major letter that accompanied the shipment of Madame Bovary, dedicated to Victor Hugo. Although I Naie not the honor to know you personally I take the liberty to give you lexemplaire of a novel.

I beg you to send to hugo mr. Be good enough, too, to accept another attached and deign to accept lhommage in my account. In this letter, Paul prays flaubert meurice pass to Victor Hugo. While in exile in Guernsey. A copy of his chief duvre.

A few copies of the paper drawn on strong vellum, only deluxe edition, following the publication of the novel by Michel Lévy. The complicity between meurice and hugo was great. In 1848, Hugo actually the editor of the newspaper. Quil just founded and which earned him the prison in 1851.

During the twenty years Dexil of Victor Hugo, meurice is the charge of the financial interests of writer and literary outlaw. Flaubert and Hugo sétaient met for the first time in 1843. Deeply flaubert Youth, which became more critical with time, but not without. Admiration, evidenced by the numerous correspondences with his family. Flaubert held to ensure, in a feydau in ernest letter of 5 August 1857 that its volume is well reached its destination.

\August 30, 1857, hugo answer Flaubert. \There is between you and me a bond of fate that mattache your success. \In this letter accompanying shipment. From one of the greatest novels of the nineteenth century. The item \The seller is \This article can be shipped worldwide.