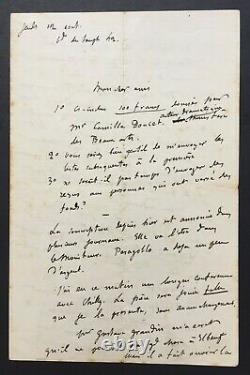 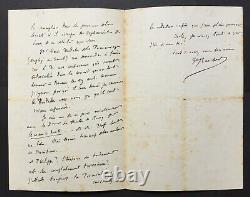 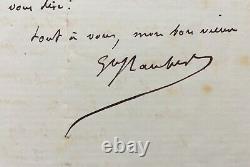 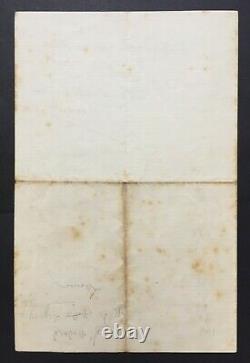 A beautiful letter that bears witness to the collaboration and friendship between the two writers, in which flaubert details through the menu and explains to his friend all the steps taken concerning their play "the heart on the right". Flaubert, with louis bouilhet, wrote this play (circa 1859) which was played only after the death of bouilhet. A close friend of Flaubert's, he played an essential role with the writer and made him the recommendations of the utmost rigour for the writing of his works, including Madame Bovary. Flaubert was greatly affected by his death and wrote: "I buried my literary conscience, my judgment, my compass before yesterday.

Half of my brain has remained forever at the monumental cemetery." 1° here-included 100 francs donated by mr camille sourt dramatic author Ministry of Fine Arts. 2° you would be very kind to send the subsequent lists to the first. Would it not be time to send receipts to those who have contributed funds?

The subscription since yesterday is announced in several newspapers. She's gonna be in the monitor. Peragallo already has some money.

I had a long talk with Chilly this morning. The play will be played as I present it, without any change.

Gustave great in my writing that he could not do much to elbeuf but he had the subscription opened in the locality's newspapers he took care of the orpheonists to shoot on that side. Henri berdalle de la pommeraye (used at the senate) asks me to do on l. A conference to be held in the concert to be given to rouen on August 29. As I do not know by whom it will be given, I send the berdalle back to you so that it is better informed. I'm going one of these days to pick up with the cluny theatre director for the cur on the right. I found a lot of good will on the monitor. Is the history of the will completely over? [the will in question is that written by bouilhet to his adopted son, philippe, to whom he bequeathed his modest fortune and his manuscripts].

I'm still waiting for the power of attorney - keep an eye on the writing so that I can have full power. That, I think, is all I have to say to you? Léonce peragallo (18.1882), general agent of the society of dramatic authors. Gustave grandin, journalist and dramatic author. One of the main editors of the "journal du cher" (bourges) from 1858 to 1898.

Coming from Rouen, he settled in buds in 1858. The gout widespread in the paris of the conferences opened an opportunity for him to reconcile his literary skills with his oratorial faculties and, in particular, organized public readings in the theatre of cluny. Good condition - sending by chronopost. The item "gustave flaubert letter autograph signed louis bouilhet le cur on the right" has been on sale since Saturday 23 October 2021. It is in the category "collections\letters, old papers\autographs\historical persons".