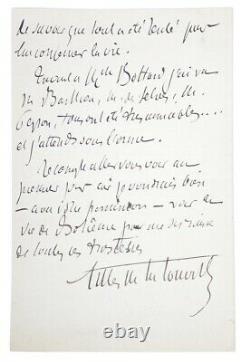 4 pages in black ink on a filled sheet, some highlights. An exceptional unpublished autograph letter recounting the death of alphonse daudet, whose tourette's gilt - his neighbour and friend - was one of the very first witnesses. This letter, to the unknown recipient, was probably addressed to \"? Fulgence raymond, successor of charcot jean-martin as holder of the chair of neurology of the salpêtrière and of which the gilt of the tourette was the associate.

The medical precision with which the latter describes the attempt to resuscitate daudet alphonse corroborates this hypothesis? For an hour we did artificial respiration hoping always to leave his breath? I then went to get a rubber tube to breathe air into the larynx, and then I brought my electric machine, nothing more. He died of a syncope of bulbar origin or better of a laryngeal ictus during a locomotor-progressive ataxia.

Of course my dear master this letter is confidential or at least the diagnosis of the disease to which he has succumbed. The use of the simple past and the presence of precise temporal cues give this letter an undeniable narrative dimension? Last night at 7:1/2am I had just sat down at the table when the concierge of m.

Alphonse daudet my door neighbor penetrated all panicked in the dining room shouting? Quickly a doctor gentleman dies? A minute later I entered the dining room of the daudet. Floored on the carpet m.

Daudet around him weeps his two sons, his wife and his daughter. \" doctor but also literalizer, gilles de la tourette - under the pseudonym of paracelse - was a regular columnist at the. Fascinated by the representation of madness in the theatre, he shared his passion for literature with alphonse daudet, his \"? \" rue de l'université. The two friends met via jean-martin charcot, which held lounge every Thursday in his hotel in vangerville, Boulevard Saint-germain.

Gilles de la tourette had a great admiration for the Provençal writer whose loss he deplores here? A second to kill 50 years of intelligence?!? Gilles de la tourette also mentions in this daisy letter bottard, a dedicated supervisor of his service to the saltpeter mercy and to whom he wishes to obtain the Legion of Honor? As for Miss Bottard I saw m.\" he interceded indeed with the minister - m.

Bartou - and, on January 18, 1898, \"?\" was elevated to the rank of Knight of the Legion of Honour, a rare consecration for a woman at that time. The autograph letters of the tourette's gilt are rare and sought after. English translation available upon request. The item \"Gilles de la tourette autograph letter signed dead daudet manuscript 1897\" has been on sale since Wednesday, June 24, 2020.

It is in the category \"books, comics, old books, collectibles\". The seller is \"books and engravings\" and is located at/in fra.

This item can be shipped to the following countries: America, Europe, Asia, Australia.