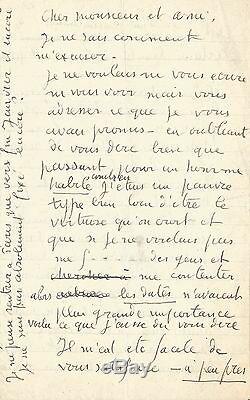 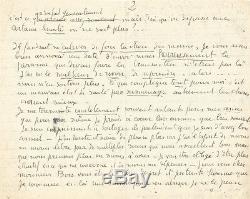 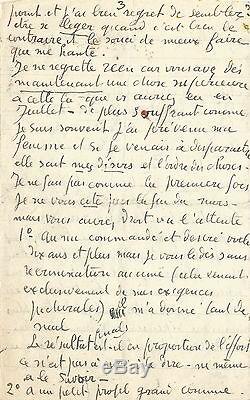 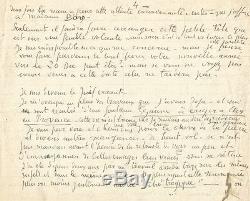 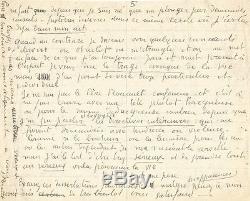 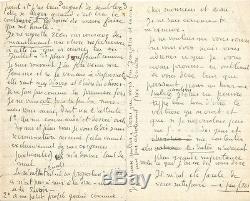 The bookstore autograph centuries has specialized for many years in the sale of autograph letters and manuscripts. Manuscripts of those who made the glory of the arts, literature, history and science in past centuries. Autograph letter signed in lun of its sponsors.

\That's why so many life weighs on me. Long and exciting letter rouault the pangs of artistic creation. \I did not write to you or see you, but contact that I promised you forgetting to tell you that the way to a clever man I was a jerk though far from being the quon virtuoso believes and that if I did not want I f people and be content, so the dates navaient greater importance. That's what you tell the jeusse. He moves easy to satisfy you so.

This is usually done but once you exceed a certain limit we do not know? It would take me by force the hand thing. I've had the misfortune to see, then we resume nen go out more.

What complicates everything for me it is a poor state of health by overwork, otherwise things would get better. I often torment me unnecessarily much for my friends and for myself; I take to heart their troubles that often I am helpless to relieve; they claim that I am good advice dassez jen probably even more because I mind less free by multiple problems that beset us all, but we take more or less to the heart. I'll have to BE more careful regarding me and spend less me, for you dear Mr. You are the most discreet and patient man I know. Is this a reason to abuse? I do not think the point and I have much regret to seem so light when it's the opposite and the desire to do better that haunts me.

I regret nothing because you have now a higher thing than you would have had in July. Moreover, suffering as I am often, I have warned my wife and if I were to disappear, she knows my desires and order things you'll get seen waiting: 1. Bare ordered and wanted ten years ago and more; but I tell you without any recrimination (this only from my pictorial requirements), it gave me so much trouble.

Is the result in proportion to the effort? It's not for me to say or even to know. 2 to a small profile as large as twice the hand for this waiting unseemly certainly - I offer same wood. But it will make arranging this little head which is on a separate sheet. My concern this is all you deliver as soon as possible.

I am unavailable for me but I think you send everything to your new year, to 20 December, perhaps? But if you still do not see coming that date, it will not tarry. I became the wandering Jew. I deal in addition to the work already javais, a fountain erected Cézanne in Aix en Provence. This life mest good because I followed to tell doctors a way very dangerous. I go by tracks and paths for the choice of stone and various other high-flying shenanigans. This is not bad lheure before retirement to see some beautiful and store many real images in his retina. I was two years by hard work too on the same subject and in the same circle.

Also having this reputation more or less precisely determined to be \When on the contrary I should see some clowns or innocent charlot it strangles me and put me in front of what I always day and harmed this in mind. I mean the tragi-comedy of life but too much of a particular and individual perspective.

I am not the father confessor rouault and this is not to believe with my head rather surly or at least disdain. How much since I was able to speak and stutter internal guidelines which were requested me with tenderness and violence. As if happiness or light to one or the other depended on my miserable brain. But i wrong BE too serious and take everything seriously. Excuse these whimsical essays despite appearances. Think of my secret desire to satisfy you soon. The item \The seller is \This article can be shipped worldwide.