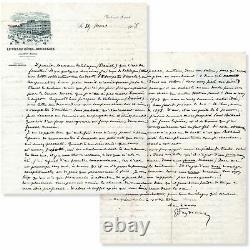 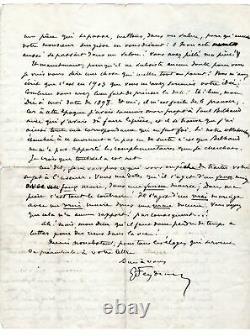 Drawing and autograph poem signed at his muse - bookstore the wise step. Signed autograph letter on the subject of "take care of amelia". Feydeau settles his accounts with an author accusing him of plagiarism. Signed autograph letter on the subject. Valabrègue (Daniel) that it is family. A few weeks ago I received Mr. Valabrègue (Albin) a letter asking for the rights "to take care of amelia", a compensation to a room which he had once given me the title and the middle but which I have not been able to do so until now for the good reason that I have not yet found the subject. Today I receive from valabrègue (daniel) a letter asking me for compensation on the same. On the pretext that he would one day have provided me with a script or a project or it was, it seems, a question of a false marriage, with a false mayor, in a false town hall. I remember that in the past you have repeatedly urged me to recommend to Samuel a small act that you have presented to him. As for a scenario that you would have proposed to me, this absolutely came out of my memory.

In any case there is one certain thing, it is that if it has been, I have refused to get to know it, because it is a principle in my house, unless they are exceptional personalities, or people I know very well. I know too much that we only have trouble waiting for this kind of complacency without ever having the chance to meet a profitable idea. And then it is enough after you write a room that happens, let's put in a living room, so that so early your gentleman comes up and says: my act also happened in a living room!

And now, so that there is no doubt for you I will tell you something that will make everything perfect! You wrote to me that it was in 1903 that you gave me your idea, how well you did to specify the date!

Well, my idea dates back to 1898. And this, it is easy for me to prove it; for at that time I would have provided my project to paul bilhaud with whom I had to make the play, and it turns out that I thus have all the correspondence that proves it. If our collaboration at this time did not have a follow-up, it was that bilhaud did not bring me the complementary ones I was looking for. I think all this is clear.

Having said that, I do not see what prevents you from dealing with your subject in the future. You are telling me that this is a false marriage, with false mayor, in a false town hall; in my room it is quite the opposite!

It's a real wedding with a real mayor in a real town hall. You see that has nothing to do with it! But my God, we must therefore waste time fighting for nothing in life! Thank you, however, for all the praises that serve as the preamble to your letter. Black ink, on letterhead of the big Brussels hotel.

Paris: 8 December 1862 - rueil-? This item is in the category "books, bd, magazines\old books, collection". The seller is "le-pas-sage-rare-books" and is located in this country: fr.