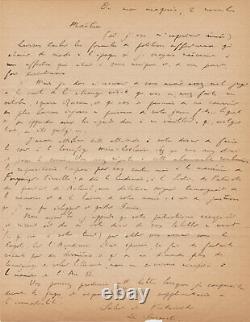 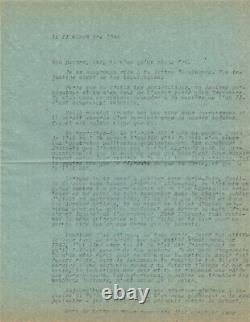 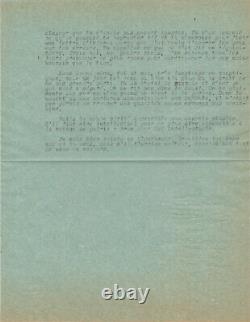 Signed autograph letter to maurice boy. Autograph letter signed "the suspect", [paris], November 2, 1944, 1 page in-4°, to maurice boy. Important letter about the historical jamming between the groves of the fenchard and the maurice boy. At the time of writing, the two authors have been friends for more than thirty years: collaborations, discussions, dinners and even pleadings strengthen their friendship. In 1924, maurice boy had defended the humorist in a libel lawsuit brought by mgr georges grente after the journalist had mentioned the rents collected "at the price of stupre" on the exploitation of prostitution houses in the street of the nearby gang-of-gorrons of the cathedral.

The two competitors also lent themselves to funny "oratory games" as at the evening organized in December 1924 with the theme: "The blue beard trial: should we rehabilitate rais girls, companion of arch jeanne and former Marshal of France? Until the day when German troops landed in bets. At that time, the journalist, guided by his anti-militarism, joined the collaboration.

His main employer, the newspaper opened it, had ceased to appear and reappeared on 21 September 1940 under the direction of a great figure of collaboration during the occupation, marcel déat. Before joining the opening, he signs a final article in the paris-soir which is scandalous: "I thank those of you who have shown me their sympathy. Do I have to apologize to those whose feelings I have broken and who have shown me their reprobation? Not everyone has understood that the france is defeated, that it must submit to the correct winner and try a fair collaboration. Shocked, maurice boy cuts the article and glues it into his diary. He adds, in note: "I have great sadness to find such an old friend. The lawyer, gradually moving away from the journalist, is still saddened to lose "this poor guy whom, despite his palinodies, he likes. In order to know the reason for this sudden distance, the girl asks for an interview and the tone goes up when the latter does not understand what is wrong with the collaboration.

When released, the fenchard's georges feared purification and possible imprisonment. The public also turned against him and, no longer holding, he addressed this explosive letter to the lawyer, in which he compared him to antoine ferquier-tinville, public accuser and motor of the revolutionary court. This letter is accompanied by the tapuscrite copy of the reply sent by maurice boy. These two letters are cited in the beautiful work of antonowicz girls: master maurice boy, artist (segher editions, 2021), page 62.

From my maquis, November 2. Master (if I dare to express myself in this way). Let go of the loving politeness formulas that were fashioned at the time when I naively believed in my affection that was one-sided and, on my part, very disinterested. But I must apologise for having misjudged you as a result of the strange visit you made to me in October, square racan, which allowed you to cover me with the lowest insults in the presence of your young son...

Which was able to learn in this way the respects due to an old man who, despite everything, was someone. I attributed this attitude to your desire to court the horrific Lachaise mother with whom you had dinner and spent the evening.

You repeated to this abominable the requirement composed by you against me in the way of fenquier-tinville; and the next day, in the section of the patriots of the quarter of auteuil, a signed delation was a testament to the memory and hatred of your friend: it was just that I was able to escape and leave bets. But today, I learn that your exasperated and recent patriotism is due to your desire to dress in green (which will go to your complexion) to go sit under the dome of the academy being clean, in fact vacant armchairs for behinds who are no longer asked for testimonials of literary value, but an exasperated civicism in memory of year ii.

You will be able to produce this letter when I appear before the judges and thus acquire an additional title to immortality. Hi and fraternity the suspect. English and Russian translations available on request. Autographed letter signed by the Provisional Government of the French Republic. Little tear at the bottom of the sheet.

Georges alphonse de la fouchardière is a journalist at the. As well as author of several literary works, among others.

A narrative adapted to cinema by Jean Renoir under the same title and by friez lang. Maurice boy is a lawyer, essayist, parolier, novelist, polygraph and French historian. He is best known for having defended a large number of causes, both literary and criminal, including those of hardy renee, georges arnaud, jean genet and jean-jacques pauvert. More information about groves from the fenchard. More informations about maurice boy.

This is an authentic letter. Our letters are accompanied by a descriptive sheet including a transcript. The invoices and cards we issue are instead of a guarantee certificate. France free shipping private carrier on request.

Shiltonson Rare Books & Manuscripts. This item is in the category "collections\letters, old papers\autographs\historical persons". The seller is "shiltonson-paris" and is located in this country: fr. This item can be shipped to the following country: whole world.