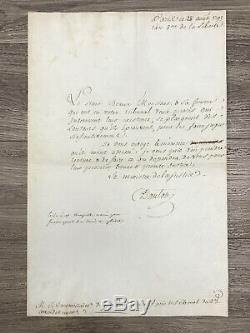 Rare and beautiful signed danton, August 28, 1792. The beautiful lord, sir, and his wife have in your two trial court that interest their lives, complain of delays they experience, to try them permanently. I sent you the memory.

Please read & to take to do what depends on you to provide them with good and prompt justice. Write to m banguille as to when he gave his complaint. Mr commissioner of the executive power near the 9th district court. Danton was appointed Minister of Justice August 10, 1792 in the executive council of six ministers, only hours after taking the castle and Tuileries leading to the final fall of the monarchy. This document shows that danton really exercised his responsibilities during his short time in the ministry.

On the same date of 28 August 1792, danton ordered searches in all \This mission will be entrusted to the 48 sections of the town. The posters then proclaim: \We are then on the eve of the September massacres .. item \papers \ autographs \ others. \The seller is \This article can be shipped worldwide.